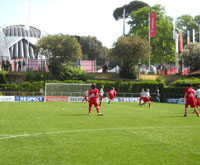 Banjul, The Gambia (TNBES) The World Football Governing Body (FIFA) has granted The Gambia Football Association US$400, 000.00 for the construction of another artificial turf in The Gambia.
”FIFA in its magnanimity has granted the GFA with a handsome amount of US$400,000.00 for the construction of the second synthetic pitch in The Gambia,” the GFA said in a media dispatch.
The release stated that the Goal Bureau of FIFA at its meeting held on March 15, 2010 in Zurich has approved the application of The Gambia Football Association and consequently awarded the country’s football governing body with the third Goal project for the construction of the second artificial turf pitch at the National Technical Training Centre situated at Yundum, Western Region.
”FIFA in its drive to modernise world football has over the years funded the construction of the National Technical Training Centre in Yundum, the National Secretariat dubbed the House of football situated in the Kanifing East Estate and the artificial turf pitch in Brikama, Western Region,” the CAF Education Officer, Abdou Salaam Jammeh said.
The release also noted that The Gambia was selected from a laundry list of countries to benefit from the third FIFA Goal project.
FIFA has initiated a number of projects ranging from trainings of football officials, journalists and the construction of mini Stadia among other things for its members in Africa, under its 2010 Goal Project dubbed ‘Win in Africa for Africa’.Vol:2 ISSN:144
Posted by Modou S. Joof at 17:52