Former Liberian President Charles Taylor is seen at the U.N.-backed Special Court for Sierra Leone in Leidschendam, the Netherlands


LEIDSCHENDAM, Netherlands (AP) — Judges at an international war crimes court sentenced former Liberian President Charles Taylor to 50 years in prison Wednesday, saying he was responsible for "some of the most heinous and brutal crimes recorded in human history."
The 64-year-old warlord-turned-president is the first former head of state convicted by an international war crimes court since World War II and judges said they had no precedent when deciding his sentence.


Taylor will serve his sentence in a British jail. His lawyers, however, are expected to appeal his convictions and that will likely keep him in a jail in The Hague, Netherlands, for months.

Taylor was convicted last month on 11 charges of aiding and abetting the rebels who went on a savage rampage during the decade-long war that ended in 2002 with more than 50,000 dead. Prosecutors say he funneled arms, ammunition and other supplies in return for "blood diamonds" mined using slave labor.

Presiding Judge Richard Lussick told Taylor his crimes were of the "utmost gravity in terms of scale and brutality."

"The lives of many more innocent civilians in Sierra Leone were lost or destroyed as a direct result of his actions," Lussick said. Taylor showed no emotion as Lussick handed down what will effectively be a life sentence.

Prosecutors had asked judges at the Special Court for Sierra Leone to impose an 80-year sentence; Taylor's lawyers urged judges to hand down a sentence that offered him some hope of release before he dies.

Lussick said an 80-year sentence would have been excessive as Taylor was convicted of aiding and abetting crimes and not direct involvement. But the judge added that Taylor was "in a class of his own" compared to others convicted by the United Nations-backed court.

"The special status of Mr. Taylor as a head of state puts him in a different category of offenders for the purpose of sentencing," Lussick said.

At a sentencing hearing earlier this month, Taylor expressed "deepest sympathy" for the suffering of victims of atrocities in Sierra Leone, but insisted he had acted to help stabilize the West Africa region and claimed he never knowingly assisted in the commission of crimes.

"What I did...was done with honor," he said. "I was convinced that unless there was peace in Sierra Leone, Liberia would not be able to move forward."

However, judges ruled that Taylor armed and supplied the rebels in full knowledge they would likely use weapons to commit terrible crimes, in exchange for payments of "blood diamonds" often obtained by slave labor.

Prosecutors said there was no reason for leniency, given the extreme nature of the crimes, Taylor's "greed" and misuse of his position of power.

"The purposely cruel and savage crimes committed included public executions and amputations of civilians, the display of decapitated heads at checkpoints, the killing and public disembowelment of a civilian whose intestines were then stretched across the road to make a check point, public rapes of women and girls, and people burned alive in their homes," prosecutor Brenda Hollis wrote in a brief appealing for the 80-year sentence.

Taylor stepped down and fled into exile in Nigeria after being indicted by the court in 2003. He was finally arrested and sent to the Netherlands in 2006.

While the Sierra Leone court is based in that country's capital, Freetown, Taylor's trial is being staged in Leidschendam, a suburb of The Hague, for fear holding it in West Africa could destabilize the region. 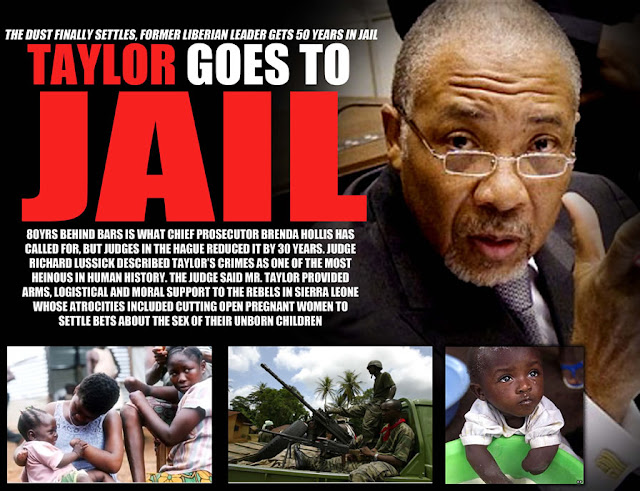