A crazy end to a crazy season as Manchester City clinch the English Premier League with two dramatic injury-time goals. 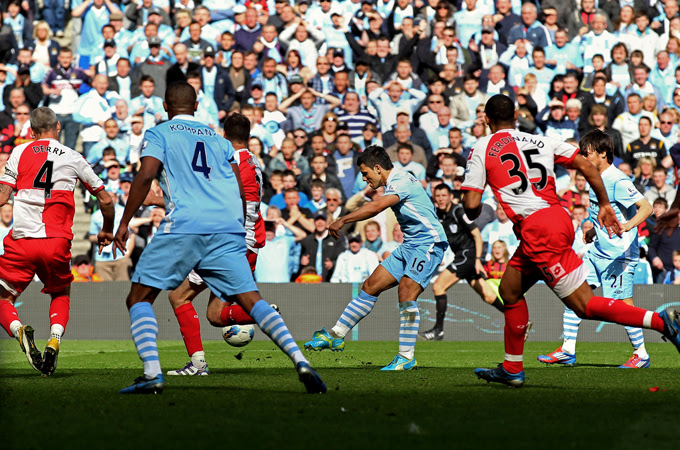 The moment City fans had been dreaming about: Sergio Aguero scores his team's third and match-winning goal in the dying moments of the game [GETTY]
Sergio Aguero's 93rd-minute goal secured Manchester City a 3-2 victory over QPR as his side scored twice in injury-time to win their first English Premier league championship in 44 years at the expense of neighbours and defending champions United.

Seconds after the final whistle at Sunderland had seen United secure a 1-0 victory, City were trailing 2-1 to QPR and were destined to become the first team in 23 years to enter the final round of games in first place and fail to win the title. 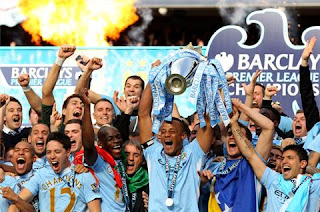 But, with Rangers having played the final 36 minutes with only ten men following the dismissal of Joey Barton, Aguero collected the ball and played a one-two with Mario Balotelli, evading the lunge of defender Nedum Onuoha and firing past Paddy Kenny.

The scenes of jubilation that greeted the goal, and the final whistle two minutes later, summed up an incredible afternoon that was a fitting finale to the most amazing season in Premier League history.
"I don't think I've ever seen a finale like this,'' City manager Roberto Mancini said.

"We didn't deserve to lose, we had a lot of chances and we deserved to win the game and championship. It's fantastic for the club and the supporters after 44 years. It's been a crazy season and a crazy last minute.''

Tension and drama
A late first half goal from Pablo Zabaleta seemed to have removed any danger of an upset.
But Djibril Cisse and Jamie Mackie scored, either side of Barton's shameful dismissal for elbowing Carlos Tevez, to leave Roberto Mancini's team needing two goals, which would not arrive until injury-time, Edin Dzeko producing a 91st minute header which made it 3-2 to QPR.

The opening goal had come six minutes before half-time from the unlikely source of Zabaleta and should have settled any anxieties City harboured.

The Argentine full-back started the move on the right flank, David Silva and Yaya Toure continuing it with short, sharp passes which allowed Zabaleta to run onto the loose ball and deliver a fairly innocuous shot which goalkeeper Kenny could only parry up into the air with the ball flying over his head and into the net via the left-hand post.

Not surprisingly, the mood shifted instantly around the stadium with City finally having something to show for a half of almost unrelenting dominance.

But three minutes into the second half, the title race was turned upon its head from QPR's first attack of the game.

A hopeful ball forward from former City winger Shaun Wright-Phillips should have presented no problem to defender Joleon Lescott but his mistimed header saw the ball played directly to Cisse who advanced and, from one step inside the City area, sent a fearsome shot past the City goalkeeper Joe Hart.

It was an incredible turn of events, and one that had seemed so unlikely for the previous 48 minutes, but it took only six minutes more for Barton's bizarre act of thuggery to make an impact on proceedings.

Having tussled with Tevez on the edge of the QPR area, Barton appeared to elbow his opponent in the face and, after consulting his assistant, referee Mike Dean showed the controversial midfielder an automatic red card.

Worse was to follow, however, as Dean struggled to maintain calm. Barton clearly kicked Aguero from behind as he was leaving the field, sparking even greater scenes of pandemonium.

When some degree of calm had been restored, it appeared only a matter of time before City scored the vital second, however they were not prepared for Rangers' 65th minute sortie upfield.

Substitute Armand Traore sprinted down the left wing and sent over a cross which hung in the air invitingly for Mackie who sprinted in to connect with a diving header which flew past Hart and Lescott's desperate goal-line lunge.

A traumatic defeat loomed as the game headed into injury time, before Dzeko and Aguero struck to cap the most remarkable end to a Premier League campaign in history.
"I never stopped believing,'' City captain Vincent Kompany said.

"When Edin scored that goal, it reminded me of so many other moments during the season when we've done this before. There was no reason not to believe.

"It's not sunk in yet. I don't know what happened at the end, it was just a huge mess.''

In the other issues to be settled on Sunday, Arsenal clinched third place with a 3-2 win at West Bromwich Albion while Tottenham sealed fourth place with a 2-0 win over Fulham at White Hart Lane.
Tottenham, however, face a nervous wait to see if they will advance to next season's European Champions League.

Elsewhere Sunday, Newcastle's brave challenge for a top four finish ended in a 3-1 defeat at Everton which left the Magpies in fifth place.

Liverpool's disappointing season ended on a downbeat note with a 1-0 loss at Swansea.