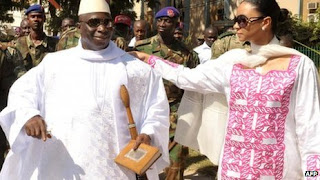 The Presidential Candidate of the United Democratic Party (UDP), Mr Lawyer Ousainou ANM Darboe has described the results of Thursday’s election in Gambia as “bogus” and says his party vehemently rejects it, while addressing his supporters at his residence along Kairaba Avenue, shortly after the incumbent was declared winner.

Mr Darboe, did not want to speak to the press after the final result was announced, instead, his party issued a preliminary statement saying: “The UDP/GMC United Alliance vehemently and unconditionally rejects the results of the just concluded Presidential Elections as announced by the Chairman of the Independent Electoral Commission.”

Parties to Gambia’s 2011 presidential election gave their final views and comments on November 24, 2011 shortly after casting their votes, while the outcome of the results remain uncertain even when the incumbent was largely regarded favourite.
Read more »
Posted by Modou S. Joof at 13:53 No comments:

(Reuters) - Gambian President Yahya Jammeh benefited from a strong media bias and greater financial resources than his rivals to secure a new five-year term in elections, the African Union said on Saturday.
Former military coup leader Jammeh scored a landslide 72 percent victory on Thursday to extend his 17 year-rule over the tiny West African country, criticised for alleged human rights abuses and press-muzzling.
"Although provision was made for equal access of all political parties and candidates to the public media, the actual coverage was strongly weighted in favour of the candidate of the ruling party," the AU observer mission concluded.
Read more »
Posted by Modou S. Joof at 13:31 No comments: 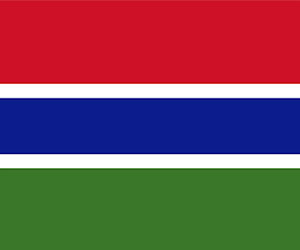 A Commonwealth expert team which observed the 24 November 2011 elections in The Gambia has said that although the poll was conducted in a peaceful manner, more democratic reforms are needed to strengthen governance in the country.
The Chair of the team, former Nigerian foreign minister, Professor A. Bolaji Akinyemi, said in an Interim Statement on 28 November that: We commend political parties and the people of The Gambia for the peaceful manner in which the campaigns were generally held. We also commend the role of the Independent Electoral Commission (IEC) for regulating the campaign under the Code on Election Campaign Ethics Order (made under section 92(1) of the Elections Act), and ensuring airtime on state media for all parties."
He however added that a short campaign period and advantage of incumbency as well as use of public resources by the government made the play ground unlevelled.
For the full statement on The Gambia election, click here.

Darboe  says the office of the president must observe good manners
Jammeh says he will accept results if defeated
“I was disappointed by the disgraceful and outrageous fabrication by the office of the President that my convoy attacked the ruling party APRC  supporters at a military check point at Camp Fenda . There could not be more fabrication than that,” lawyer Ousainou Darboe said on Thursday shortly after casting his ballot at a polling station at Fajara, while describing the election campaign as peaceful.
Read more »
Posted by Modou S. Joof at 12:26 No comments:

Gambians head to the polls

However, Mr Darboe moved quickly to dismiss the results and called it “bogus” and also stressed that his party will not accept them. He was addressing his party supporters at his residence along Kairaba Avenue, Kanifing Municipality immediately after the final results was announced.

On the eve of the election, the sub-regional economic bloc, ECOWAS said its fact finding mission finds that the election process will not be free and fair. It says the opposition was cowed and intimidated and that there is a "climate of fear" and the political environment does not meet minimum standards..

Women-rights: 16 days of activism to eliminate violence against women

In August 2011, men and boys aged 18 to 25 were invited by the UNiTE campaign to use their creativity and imagination to create designs that Say NO to violence against women and girls and embody equality and respect.

The T-shirt design competition reached out to young men throughout the world to help end violence against women and girl. Thirty-four regional and global judges have selected the five top designs, one each from Africa, Asia and the Pacific, Europe, Latin America and the Caribbean, and North Africa. The winning entries will be announced on 23 November 2011 in New York.
Read more »
Posted by Modou S. Joof at 21:52 No comments:

Gambia’s electoral commission briefs observer missions and diplomats
The Gambia Independent Electoral Commission (IEC), headed by Alhagi Mustapha L. Carayol on Tuesday brief both local and international election observer missions and Diplomats to the Gambia on its preparedness for the conduct of the November 24, 2011 presidential elections.
The Commonwealth, African Union (AU), and the European Union are among international observer mission accredited to monitor the election.
Speaking at a local hotel, Mr Carayol, the IEC Chairman noted that IEC was established under Chapter 5, Section 42 of the Constitution of the Republic of The Gambia, and it is mandated under the Constitution and the Electoral laws to register political parties, conduct and supervise the registration of voters for all public elections and referenda.
Read more »
Posted by Modou S. Joof at 10:30 No comments:

NYP/Peace Ambassadors to observe Gambia presidential election
The National Youth Parliament (NYP) and Peace Ambassadors-The Gambia (formally of Youth Ambassadors of Peace) has announced on Tuesday that they will jointly observe the 2011 presidential election.
The two youth organisation said they will deploy their observer team in all seven administrative regions of The Gambia on Thursday and will submit a drafted report to the Independent Electoral Commission (IEC) within 24 hours, with a final report due on 26 November.

A journalist's guide to verifying info on the web

(ijnet) When a frustrated computer programmer created a fake website and press release about a study showing Internet Explorer users are not as smart as people who used other browsers, major media organizations fell for the hoax.
Read more »
Posted by Modou S. Joof at 10:01 No comments: