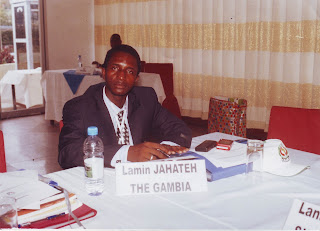 Lamin Jahateh, editor and publisher of Gambia News Online, an online newspaper, on Thursday left to Dakar, Senegal, to attend the World Press Conference organized by the Inter-Governmental Action Group against Money Laundering in West Africa (GIABA).
Mr Jahateh, who is the national correspondent of African Press Agency (APA), will join other journalists and media executives from various media houses within and outside the West African region at the conference which is meant to sensitise information managers to their responsibilities and obligations under the Anti-Money Laundering and Counter-Financing of Terrorism (AML/CFT) regime towards fostering and strengthening partnership between GIABA and the media in the fight against money laundering and terrorist financing in West Africa.
Read more »
Posted by Modou S. Joof at 09:50 No comments:

Following widespread local reports on the “theft of President Yahya Jammeh identity” on the professional social networking site, LinkedIn, Gambian journalist and blogger, Modou S. Joof, ask whether the “climate of fear” allegedly hanging over human rights defenders in his country has spread to the inner circle of Government.

Insurance practitioners in the West Africa sub-region gathered in the Gambian capital, Banjul to discuss professionalism and ethical practices in the industry needed to build public trust.

The professionals believe the insurance industry has been taint by unprofessional and unethical insurance institutions and individuals practitioners, thus bringing about growing public mistrust and as well a slow growth and development of the industry in the sub-region.
Read more »
Posted by Modou S. Joof at 14:53 1 comment:

At a time when credit unions are regarded the “sharpest cutting edge against poverty”, the  National Co-operative Credit Union of the Gambia (NACCUG), is taking strategic actions to ensure Gambia’s credit union movement continues to be financially relevant to affiliates.
Read more »
Posted by Modou S. Joof at 14:02 No comments:

Governments must free locked up journalists

In a statement delivered at the ongoing 51st Ordinary Session of the ACHPR in Banjul, the Gambia (18th April - 2nd May, 2012), the President of FAJ, Omar Faruk Osman, called on the African Commission to ensure member states end the use of anti-terror laws against journalists doing their journalistic work.
Read more »
Posted by Modou S. Joof at 13:36 No comments:

Highlights from the Africa Carbon Forum in Addis Ababa

The Managing Director of Prime Insurance Company Limited, Mr. Dawda Sarge, has taken over the position of presidency of the West African Insurance Companies Association (WAICA).

His tenure will end in 2013. He succeeded Mr. Fatai Lawal, the Chief Executive of Sterling Assurance Nigerian Limited.

Mr. Sarge’s inauguration was held on Tuesday at the end of a yearly general meeting and educational conference of WAICA, which brought together some 200 insurance professionals from the West Africa sub-region, held in Banjul, The Gambia (April 15-17, 2012).
Read more »
Posted by Modou S. Joof at 12:16 1 comment:

(MFWA) - Participants at the NGOs Forum of African Commission on Human and People’s Right (ACHPR) on April 12, 2012 added their voice to the widespread condemnation of the Gambian authorities over their deliberate policy of blocking access to critical online news websites in the country.
Read more »
Posted by Modou S. Joof at 21:32 No comments:

After 73 days of murder investigation officer get permission to exhume the bodies of journalist couple Sagar Sarowar and his wife Meherun Runi from their graves for second autopsy.

Today court of Bangladesh gives this permission. After this order, people start criticism comment on Face Book, Twitter and other on line media regarding this issue.

The 100 Most Influential People in the World

They are the people who inspire us, entertain us, challenge us and change our world. Meet the breakouts, pioneers, moguls, leaders and icons who make up this year's TIME 100

Growing concerns over the precarious state of migrants in sub-Saharan Africa have been raised once again by the multinational network against violation of migrants’ rights, Justice Without Borders for Migrants/Justice sans frontiers pour les migrants et migrantes (JWBM/JSFM).

This followed recent mass-expulsion of migrants from Mauritania to Senegal and Mali, and from Morocco to Algeria, coupled with recent massive displacement fueled by the Tuareg rebellion in northern Mali.
Read more »
Posted by Modou S. Joof at 18:16 No comments:

Gambia’s President, Yahya Jammeh has reiterated that his government maintains its “zero tolerance” against drugs in the country, vowing not to “not give chance” to anyone at any cost.

His renewed frowns on drug trafficking into the country and its usage came Friday when he presided over the State Opening of the 2012 Legislative Session of the National Assembly in the capital, Banjul.
Read more »
Posted by Modou S. Joof at 13:59 No comments:

PROPOSED RESOLUTION TO THE NGO FORUM FOR ADOPTION ON THE RIGHTS OF REFUGEES, ASYLUM SEEKERS, MIGRANTS AND DISPLACED PERSONS

Reporting terrorism is not different from reporting our normal, everyday news; news must be current and mean something to people though in different ways.

Terrorism means different things to different people as well. While others see acts of terrorism as a crime against humanity some see it as a religious duty that offers martyr status to the perpetrators.

In Nigeria, the concept of suicide bombings and armed robberies in the name of religion was initiated by the Jama’atu Ahl-Sunnati Lil Da’awati Wal Jihad otherwise known as the Boko Haram Islamist sect in Northern Nigeria. The impact and depth of their destruction to the institutions of government and public psychology is unparallel and at an increase.
Read more »
Posted by Modou S. Joof at 11:56 No comments:

The President of the International Federation ofHuman Rights, FIDH, Ms. Souhayr Belhassen on Saturday lament the pitiable pace at which governments are ratifying the African Charter on Democracy, Elections and Governance.

Only 15 countries ratified the Charter which was adopted by the 8th Ordinary Session of the African Union Assembly in Addis Ababa, Ethiopia in January 2007.

Ms. Belhassen was presenting a paper on an overview of the situation of human rights and democracy in Africa at the opening of the NGOsForum (April 14-16, 2012), preceding the 51st Ordinary Session of the African Commission on Human and People’s Rights, ACHPR in Banjul.
Read more »
Posted by Modou S. Joof at 10:47 No comments:

The Executive Director of the African Center for Democracy and Human Rights Studies, ACDHRS, Mrs. Hannah Foster described the human rights situation in Africa as precarious.

Non-governmentalorganisations (NGO) from within and outside Africa converged in Banjul, The Gambia from April 14-16, 2012 to discuss the precarious human rights situation in the continent.

While remembering victims of human rights violations in Africa, Mrs. Foster implored on the Governments to practice what they preach in order to consolidate the gains registered against impunity.
Read more »
Posted by Modou S. Joof at 10:34 No comments:

(Mansabanko) - Ms Meita Touray Secretary General of the Global Youth Innovation Network-Gambia acronym GYIN-Gambia, who is also a Reporter with the Daily Observer Newspaper has been invited to attend the fourth Africa Carbon Forum (ACF) which is schedule to place in the Ethiopian Capital Addis Ababa from the 18th-20th April 2012. Ms Touray on Tuesday 17 April, 2012 left Banjul International Airport for Ethiopia.

The matter which was under the late Justice Samuel A. Ademusu in the  Civil Division of the High Court of Sierra Leone on Monday 16th April, got a judgment after the death of Justice Ademusu.

The case  involved  Jemima I. M. M’Cormack as  Plaintiff and Comium (SL) Limited  30d Wilkinson Road, Yata Building in Freetown, as the  Defendant.

The judgment which was delivered on April 10th, 2012 before the court by the Honourable Judge Justice Katutsi.
Read more »
Posted by Modou S. Joof at 10:00 No comments:

The international free expression and media freedom watchdog, ARTICLE 19 is urging the Gambia Government to repeal draconian media laws meant to stifle freedom of expression and of the press.

It followed the organisation’s “January 2012 analysis of selected media laws” in the tiny West African country against international standards for the protection of freedom of expression.
Read more »
Posted by Modou S. Joof at 14:08 No comments:

Monday, April 16, 2012
(Daily News) Police in the provincial town of Basse are keeping under their custody a 21-year-old woman for stealing a newly born baby, The Daily News can reliably report.

Oumie Jawo’s new-born baby boy went missing a day after she was discharged from hospital after giving birth.
Read more »
Posted by Modou S. Joof at 16:55 No comments:

Sall, who was met at Banjul International Airport by President Yahya Jammeh, was expected to seek a strengthening of ties between Banjul and Dakar, sources at Gambia's ministry of foreign affairs and international relations told AFP.

He would also use his Banjul trip to seek Jammeh's intervention and assistance in finding a peaceful solution to the Casamance conflict.

Of mangoes, monkeys and a small Gambian girl

(Africa Review) - A 12 year-old girl has been shot dead by her father in The Gambia who mistook his daughter for a monkey.

The Brikama town based reporter has observed that someone has been stalking him for the past four months.

“Whenever I close from work, mostly in the night or busy on other issues, this person stalks me as I go home,” he says.

The Forum on the Participation NGOs in the 51st Ordinary Session of the African Commission on Human and People’s Rights, ACHPR, is slated for April 14-16, 2012 in Banjul.

The principal objectives of the Forum is to foster closer co-operation among NGOs, and with the African Commission; to provide a discussion platform to democracy and human rights NGOs in Africa; and to promote inter-regional networking for the implementation of decisions of the Forum as contained in the ACHPR Communiqué.

Amid worsening food crisis in the Sahel region of West Africa, international aid agencies respond to calls by the Gambia Government to help feed her people.

The country suffered a serious drop in crop production in 2011 blamed on late and erratic rains. As a result, local citizens are already running out of food supply.

United Nations and international aid agencies warn in February 2012 that drought and food shortage in the Sahel is threatening lives, with an estimated over 20 million people to go hungry.

Where to Turn When Tackling Money-in-Politics Stories

A wealth of watchdog sites make campaign-finance data accessible, easy to work with

COLORADO—Edwin Bender knows the value of a good follow-the-money story.

Bender is the executive director of the National Institute on Money in State Politics and its website, named—appropriately enough—Followthemoney.org. He’s also someone with a particular interest in prison-privatization proposals, and a particular suspicion, honed over more than a decade, about the role political donations play in encouraging elected officials to embrace privatization.
Read more »
Posted by Modou S. Joof at 22:30 No comments:

No one is safe from the crises in the world

The Amir of the Ahmadiyya Muslim Jama’at in the Gambia has projected a global catastrophe as the world continues to be plagued by numerous crises.

His projection came at a time when the world is grappling with political, economic, and food crises – the later already extant at home, the Gambia.

“The world is going through turbulent times in all fronts. No one is safe from these crises, especially the Muslim world,” said Amir Sahib Baba F. Trawally, who added: “If these crises are not properly checked, a global catastrophe is inevitable.”
Read more »
Posted by Modou S. Joof at 15:19 No comments: