A group of African experts have explored another dimension of making sure that economic growth is more evenhanded.

The Annual Progress Report “Jobs, Justice and Equity: Seizing Opportunities in Times of Global Change”, issued last week by the African Progress Panel said “there are 70 million more youth younger than 14 than there were ten years ago.”

Underscoring the coming “demographic shift” is this large youth bulge, who will need education, jobs and opportunities, the panel said.

“If current and future economies cannot provide this, there may be some negative consequences,” they warn.
“A demographic disaster marked by rising levels of youth unemployment, social dislocation and hunger,” could be preventable with more equitable growth, the Panel's report indicates. 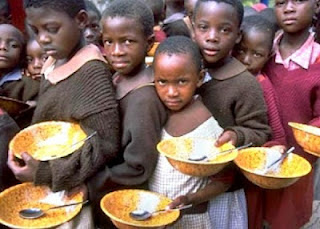 Halving poverty
The current pattern of trickle-down growth of economies in the world is not benefiting many people who find themselves in a spiral of poverty. While benefits measured by poverty reduction, maternal mortality and child hood survival fall far short of what Africans expect.

The agency, United Nations Children’s Fund, UNICEF, said about 600 million children live on less than $1 per day, while a child dies of starvation every 3.6 seconds in developing countries. The agency said tackling food insecurity and income inequality will be essential to meeting such Millennium Development Goals as halving global poverty and reducing child mortality by two-thirds by 2015.

Hunger
With a full blown food crisis already extant in sub-Saharan Africa, another UN agency, the United Nations Development Programme (UNDP), said about 214 million people, that is, one in four sub-Saharan Africans, goes hungry every day.

It warns on Tuesday that “countries in the region cannot sustain current levels of economic growth without reaching out to their most marginalized inhabitants.”

“15 million of these vulnerable people live in the drought-struck, semi-arid belt of the Sahel, which stretches across West and Central Africa. There, malnutrition is threatening the lives of one million children,” UNDP said in its “Africa Human Development Report 2012: Towards a Food Secure Future.”

Child deaths
The same report projected that more than a million children in the Sahel region are at risk of dying because they don't have enough to eat.

In Africa, growth in economy, education and life expectancy have not been met with stabilization in food security for all. Inequalities continue to put the future of many children and families at risk.

The report added: “Across sub-Saharan Africa, rural infrastructure has deteriorated, farming has languished, gender and other inequalities have deepened and food systems have stagnated.”

This is further justified by the fact that many sub-Saharan African countries have Gini index (a measure of income inequality used by some economists) measures between 0.35 and 0.6.

On the index, a score of “1” indicates perfect inequality (hypothetically all of the wealth is concentrated), while a score of “0” indicates perfect equality (hypothetically, all wealth is shared equally among the population) – the UNDP explains.  Current food crisis hit countries like Niger, has a Gini index of about 0.35, Mali has a Gini coefficient of about 0.33 and Mauritania has an income inequality level of about 0.41.

Dehumanizing
“Uneven human development continues to be influenced by the inequitable distribution of land and productive resources based on gender, ethnicity and geographical location. These power imbalances trap women and children in the poverty cycle,” the UNDP report noted.  “Women’s lack of control over land resources is one example of how power structures have impeded food security. But if women had the same access to resources as men, UN estimates show that they could produce enough food to lift 100-150 million more people out of a state of hunger.”

On this backdrop, the 2012 UNDP report exhorts for improved food security through such measures as investments in agricultural productivity, better nutrition, social safety nets to build resilience to crises, gender equality and empowerment programmes for poor rural-dwellers.

It also emphasise that food security, the ability to consistently acquire enough calories and nutrients for a healthy and productive life, is essential for human development.

However, it argues that to boost food security, action must be taken in four interrelated areas: agricultural productivity, nutrition, access to food, and empowerment of the rural poor. It state: “Increasing agricultural productivity in sustainable ways can bolster food production and economic opportunities, thereby improving food availability and increasing purchasing power.”