Gambian music has seen an upsurge in great talents in the recent past, defined by the “Golden Generation” of Rap Music in the early nineties (90s) and the (a) days of the new Millennium.
In recent years, besides reggae and traditional music, Hip Hop and R‘N’B has be very much a force to be reckon with, gaining much popularity and inline with modern day music. Trading along these lines is Gambia’s own Paapa Lengthy, who is also known as Jaisiit Bii – Sii Paah Bii (the crocodile - in the hole).
Born in the early eighties (80s) at Dobson Street in Gambia’s capital, Banjul, Aboubacarr Sadiqh Ceesay was brought up by his parents at Lartikunda German, a town situated a few kilometers north of Banjul, in the Kanifing Municipality.
At an early stage, the singer lost both of his parents during which time he has since developed a strong love for music. He started his performance during his days at Methodist Primary School formerly Boys High School, Banjul, where his Ghanaian teacher Mr. Appiah introduced him to the Choir as a “Baritone Singer”.
“I was taught by the streets of Kotu Silo, “Sii Paah Bii”, the artist said, explaining how he had lived as a youngster on the streets close to his resident where a stream flows down town in the Kanifing Municipality, stretching across Dippa Kunda, Latrikunda German and Kotu.
The stream use to be home to a Crocodile and the artist derived one of his tag names from it, Jaisiit Bii (the Crocodile) Sii Paah Bii (in the hole).
“I love music, and when I started writing songs, I have never stopped till this day. I wrote songs on Hip Hop and R‘N’B during my Junior School and I organised and headed a posse called “System Bii”, a group of four, who stormed shows in those days like boom! The rest is history,” the artist said.
However, though he never paused on his song writing, Paapa Lengthy did set aside the music during his High School, having to concentrate much on his education.
In 2006, the artist, who is also popularly known as “Souljah” returned to the music scene with Dancehall vibes he called “Bennen Afferr” (another thing) in which he mixed the popular Wolof local language and English.
“Funny in it,” he quizzed. However, his music is isn’t funny at all to his fans and music lovers as it is designed to address the injustices and social vices in society.

The singer has performed at various night clubs, notably, Tam-Tam Night Club at Senegambia. Lengthy was also among many Gambian musicians who performed in one of Gambia’s biggest music festival, the 31st Edition of the Open Mic late last year. The support was wonderful, as the artist with a lot of charisma moved the crowd. “Everybody loves it,” he said.
His stage performances are characterized by enthusiasm, dedication and a long lasting energy, to which his followers can attest. The singer is currently working on a “mix-tape” with “Shyboy Entertainment”, a local recording studio in The Gambia. The mix tape is due to be put in that market very soon.
He stands out to be one among many artists who has on an annual basis staged his own free concert on his birthday. Lengthy’s Birthday Bash, which is designed to give his fans an opportunity to mingle and interact as well as rejoice, is usually graced by top vocalists and Disc Jockeys (DJs) in the country.
The artist has also made some promotional tunes for professional DJs in FM Radio Stations in the country. His single “Jam Jam” is already a hit, in fact, a local GSM Operator, has enlisted among its fun-ring tunes. 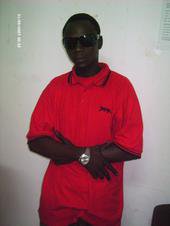 “Talalala”, another single has already mashed up the ghettos and slums, and “Giv it 2 me” is the latest on the music top ten chart.
The artist doesn’t only represent himself but The Gambian people at large. Most of his songs are meant to address social ills and the present-day situation of society. The artist has fought against all odds to establish his name in The Gambian music industry, with little or no support. A “fans club” for the artist is already in the making and will soon due for launch.
Posted by Modou S. Joof at 12:08