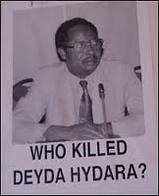 As Gambia Press Union Organised A Symposium to Mark the Day

VOL:1 ISSN:23 Gambians from different walks of life joined the media fraternity in celebrating the 5th Anniversary of the Assassination of Deyda Hydara at a Symposium organised by the Gambia Press Union (GPU) at TANGO Hall, Kanifing on Wednesday 16th December, 2009.

The Co-Founder of The Point Newspaper and Former President and Advisory to The Gambia Press Union was murdered in cold blood by yet unknown gunman/men on the 13th Anniversary of The Point, at the early hours of December 16, 2004.

Speaking on the occasion, the Vice President of the GPU, Sarata Jabbie Dibba described Deyda as a good man and a good journalist.

“Deyda addressed the concerns of the ordinary people until his last day, he fought for the rights of the people and freedom of the press,” she recalled. She added: “access to information fosters accountability as a matter of good governance.”

The Managing Editor of The Point, Pap Saine spoke on a short biographical account of the late Deyda Hydara. He started by noting that as we celebrate the 5th anniversary of his assassination, we are also celebrating his wife’s birthday as well as the 18th anniversary of The Point Newspaper.

He said that Deyda was born in Dobson Street, Banjul on 9th June, 1946. His father (Baba Hydara) was a Mauritanian immigrant, who settled in Banjul running a grocery shop, while his mother (Halima Faal) was a native of Kaur in the Upper River Region of The Gambia.

According to him, Deyda started his education at the Alliance Francaise, a French elementary school in Banjul. In 1969, he said that Deyda was sent to study at Lycee Gaston Berger in Kaolack, Senegal, after which he proceeded to Universite de Dakar (Cheikh Anta Diop University).

He started his career as a deejay at Radio Syd in 1970 and was a producer and programme manager in 1976.

Earlier on in 1974, Deyda started his career as a journalist with Agence France Presse. He also worked for the Senegambia Sun as a special correspondent, Reporters Sans Frontieres (RSF). He also served as treasurer of the West African Journalists Association (WAJA).

He also noted that Deyda also served as the president of the GPU from 1978 to 1998, and later served as an adviser to the Union, while working as editor of The Point from 1994 to 2004.

The Publisher and Proprietor of The Daily News, Madi M.K. Ceesay presented a paper on Freedom and Responsibility in the Media, but prior to his presentation, he called on the authorities to renew investigations into the death of Deyda Hydara.

It is five years since he was murdered, “why did it take this long to apprehend the perpetrators”, he asked rhetorically”.

Mr. Ceesay then went into a long narration of media harassments, intimidations, arrests and detentions that have lingered on the annals of the history of Gambian journalism. He said: “You will all recall that on April 10, 2000, Omar Barrow of the now closed down Sud FM was shot dead while providing live coverage of a student’s demonstration.

He also said that in July 2002, Gambia’s parliament passed a law requiring all journalists to register with a government appointed media commission (National Media Commission). The commission was empowered to try and jail journalists as well as compel journalists to disclose their sources.

In the same year, Ebrima Sillah, BBC correspondent in The Gambia was arrested and briefly detained by a National Intelligence Agency after he reported on growing tension between The Gambia and neighboring Guinea Bissau.

Still on the list, he noted that Lamin Njie, a reporter with The Independent, was arrested by the Serious Crime Unit of The Gambia Police Force in connection with a story entitled “Lets Take To The Streets”, published in the September 29, 2003 edition of the newspaper. This follows an interview with the leader of the National Democratic Action Movement (NDAM), Lamin Waa Juwara.

He also recalled that in April 13, 2004 State Guard Soldiers attacked and burnt the new printing press of The Independent. The arsonist burst into the newspaper’s premises in the early hours of the day while nine men were busy printing and compiling an edition of the newspaper. Some of the workers suffered gunshot wounds when the arsonists opened fire to prevent them from escaping the fire. The leaders of the arsonists were named in parliament by then Opposition Member of Parliament Hamat Bah, as Coporal Sana Manjang and Sheriff Gisseh, who also served as Guards of the State House and their commander Major Kalifa Bajinka. The accusation was not investigated and the suspects were neither arrested nor prosecuted.

He also made reference to the recent arrests of six Gambian journalists, after the publication of a reaction on the President’s statement on the late Deyda Hydara, in an interview with the state television.

According to him, reports on the Gambia’s world ranking in terms of press freedom stand at 72, as indicated by Freedom House International, United States of America. He cited The Gambia, Senegal and Ghana as examples of non-free, partially free and free according to Freedom House’s ranking in press freedom, based on legal, political and economic environment.

Madi Jobarteh of The Gambia Revenue Authority and the Foundation of Legal Aid Research and Empowerment (FLARE) presented on why Freedom and Access to Information Act Matters. He said the basic truth is that Gambia did not have a freedom of information law but have ratified all the other international conventions. “The only instrument that was domesticated is the Children’s Act.

According to him, the Freedom of Information Act states that access to information should only be restricted where as it will jeopardize the security of any state. “The US has this law for 42 years now and Sweden has had it for over 200 years, these countries are still progressing by the day,” he explained.

He argued that freedom fighters have over the years been using the press to attain liberty and any attempt to curtail this freedom is meant to gag the press. He added that Nelson Mandela once noted that it is a critical and independent press that is the life blood of every society.

He referred the audience to Article 19 of the Universal Declaration on Human Rights, which states that: “Everyone has the right to freedom of opinion and expression; this right includes freedom to hold opinions without interference and to seek, receive and impart information and ideas through any media and regardless of frontiers.”

“Freedom of information can never become a reality if there is limited access to information in any country,” he said. “There is an urgent need to establish a Freedom of Information Law,” he stressed.

“While the Constitution of The Gambia guarantees freedom of the prees, it is a fact that other laws were established to overshadow these laws,” he concluded.
Posted by Modou S. Joof at 12:46