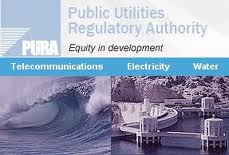 The country’s sole producer, transmitter and distributor of electricity, water and sewerage, NAWEC had applied to PURA in October 2011 for an upward review of tariffs.

This, it said, is “necessary to address its financial problems” and ward off monetary constraints that can see the company go under.

A hearing on this proposal was held on March 17, 2012 at West Field in Serrekunda where the public again massively voted against NAWEC’s proposed 33 per cent increase in tariff for the social services they provide.
In February 2011, majority of speakers at the public hearing opposed a proposed 37 per cent increase on electricity charges, yet PURA approved 17 per cent for NAWEC.


This has kept the public wondering whether their voices count at all in the tariff review process. They fail to turn-up in their numbers as they did last year and the few who were present laments how their positions could not be translated into a non-granting of NAWEC’s application by PURA.

“People have lost confidence in the public hearing, that is why the poor attendance,” said journalist Mr. Yorro Jallow, who observed that majority of the attendees are made up of NAWEC and PURA staff, a small mobilized group from the Consumer Protection Consortium (CPC) and a few individuals.

He reiterated earlier comments that the public hearing is becoming a “waste of time” after last year’s 99 per cent opposition to a tariff increase proved futile.

He explain that the Public Hearing is the six of nine steps required of the utilities regulatory body in the tariff review process before NAWEC’s application is granted or refused.

“90 per cent of stakeholders, including designated consumer groups who were consulted during step-two of the tariff review process opposed NAWEC’s proposed 33% tariff increase,” revealed a representative of the CPC, Mr. Alpha Jallow.

Mr. Jobe agreed. He said PURA is working in the interest of consumers and utilities service providers but that does not mean that if the public disapprove of the tariff increase proposal PURA will have to refuse the application.

“It has to be thoroughly looked into in the next step of the process based on the application and the comments during the public hearing. Then PURA makes a justified decision based on all the steps taken,” Mr. Jobe explains.

Meanwhile, NAWEC, which continues to operate on obsolete machines, is financially in jeopardy as the government continues to take loans and accumulating debts. NAWEC owes more than three billion Dalasi to lenders, among them financial institutions in the country.