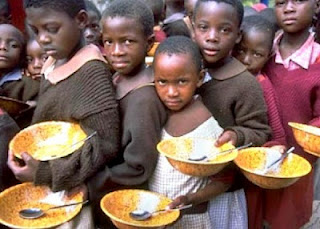 An October 11, 2012 Global Hunger Index (GHI), a report on world food production, shows that global hunger has declined since 1990, but not dramatically, and remains at a level characterized as “serious.”

The authors said South Asia reduced its GHI score substantially between 1990 and 1996, but this fast progress could not be maintained. Though Sub-Saharan Africa made less progress than South Asia after 1990, it has caught up since the turn of the millennium.

The 2011 GHI said food shortages and malnutrition have been reduced in many parts of Africa, as the continent records more success than South Asia in its fight against hunger in the last 10 years.

The report said from 1990 to 2011, 15 countries were able to reduce their scores by 50 percent or more. Nineteen countries moved out of the bottom two categories – “extremely alarming” and “alarming.” In terms of absolute progress, Angola, Bangladesh, Ethiopia, Mozambique, Nicaragua, Niger, and Vietnam saw the largest improvements between 1990 and 2011.

The Democratic Republic of Congo is also ranked among six countries in which the hunger situation worsened. The DRC’s GHI score rose by about 63 percent owing to conflict and political instability.

In a continent where hunger is endemic, the report said Africa's “relatively good performance” in tackling hunger over the last 10 years is partly due to fewer wars, and the fact that governments have become better at concentrating on improving the health of young children.

According to the authors, income inequality and the low status of women have had a negative effect on the nutrition of millions of poor families.

The three organisations behind the report used the opportunity to call on governments to do more to safeguard natural resources and address the problems associated with demographic change.
They blame climate change for causing flooding, drought and environmental degradation – issues they label as “threatening” agricultural practices.

They also call for more efficient farming methods, as well as strengthening the land-rights of poor farmers. They indicated that rising global energy prices are adding to the problem as farmers struggle with “heightened costs” associated with importing agricultural goods.

However, they also warn that people are consuming resources, including fertile land and water, far too quickly.

Tom Arnold, Concern Worldwide's chief executive officer is quoted as saying: "Agricultural production must increase substantially to meet the demands of a growing and increasingly wealthy population."
"Yet to avoid more stress on land, water and energy resources, and to ensure that all have access to adequate food, that production must be sustainable and must prioritise the poor," Tom added.