The Gambia Government has repeatedly denied having a hand in Deyda's death.


An erstwhile Gambia Press Union (GPU) President, Deyda has been a well-known critic of government policies and programmes and fought for the improvement of the ever growing poor populations in the country. His criticisms have been published in his newspaper's editorials and two columns "Good Morning Mr. President" and "The Bite".

In a recent BBC interview, Gambia's President Yahya AJJ Jammeh denied that the government's security agents had killed him. "Listen to me: Is he the only Gambian who died? Is he better than Gambians who die in accidents, Gambians who die at sea, Gambians who die on their way to Europe?" Mr Jammeh asked.

"Despite repeated calls for the State to investigate the murder and punish the culprits, no discernible step has been taken so far. The first report on the murder conducted by the National Intelligence Agency (NIA) in 2005 openly blamed the decease for his own death," the Gambia Press Union (GPU) laments. "It came up with all sorts of hypotheses without pushing the clues. And since then, there has been no further action on the matter". 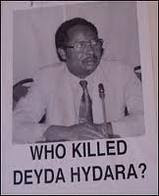 In 2009, the Publisher and Proprietor of The Daily News newspaper and former GPU President, Madi M.K. Ceesay said of the stalled investigations “the earlier the better for us all, it is not in the interest of Gambian journalists neither in the interest of the government, it is in the interest of us all.”
"It is five years since he was murdered, why did it take this long to apprehend the perpetrators”, he asked”.

In the quest to seek justice for the slain journalist and promote press freedom in the country, the GPU in cooperation with the International Center for Journalists (ICFJ) and the Association of Non Governmental Organisation (TANGO) is organising a public lecture on the theme "Role of the Media in Creating an Open Society" to commemorate the murder of Deyda Hydara.

The lecture is slated for Saturday 17th December 2011 at the TANGO Conference Hall in Kanifing at 1530GMT.

Deyda Hydara (June 9, 1946 – December 16, 2004) was a co-founder and primary editor of The Point, a major independent Gambian newspaper. He was also a correspondent for both AFP News Agency and Reporters Without Borders for more than 30 years. Deyda also worked as a Radio presenter in The Gambia called radio Syd during his early years as a freelance journalist.

Hydara was an advocate of press freedom and a fierce critic of the government of President Yahya Jammeh, who has been regarded “openly hostile” to Gambian journalists and the media.

On December 16, 2004, Hydara was killed in his car by unidentified gunmen; two of his colleagues were also injured. As of December 2011, his murder remains unsolved.
In 2005, Hydara was posthumously honoured with a PEN/Barbara Goldsmith Freedom to Write Award. He is also listed and honoured by the African Editors Forum (TAEF) in October 2010 among "Heroes of African Journalism”.
Deyda Hydara is survived by his wife and his five children.

The author is a Gambian journalist, News Editor of The Voice Newspaper in Banjul and Publisher of The North Bank Evening Standard.
Follow me on twitter: (@Msjoof)
Facebook: http://www.facebook.com/profile.php?id=100000400029361
LinkedIn: www.linkedin.com/pub/modou-s-joof/24/638/932 and his
Facebookpage:http://www.facebook.com/pages/The-North-Bank-Evening-Standard/143284775736581