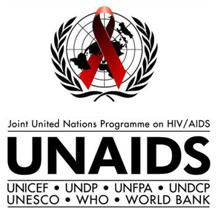 The Executive Director of the Joint United Nations Programme on HIV/AIDS (UNAIDS) Michel Sidibé and Mozambique’s Minister of Youth and Sports Pedrito Caetano launched the UNAIDS Give AIDS the Red Card initiative today at the Joaquim Chissano International Conference Center in Maputo. The announcement was made on the eve of the 10th All-Africa Games, the continent’s largest multi-sports tournament, under the patronage of Dr. Aires Aly Bonifácio, Prime Minister of Mozambique.

“Sport brings people together and is especially popular among young people. I urge all the participants and fans across Africa watching the All-Africa Games to learn the facts about HIV prevention and give AIDS the Red Card,” said Mr Caetano.

The UNAIDS Give AIDS the Red Card campaign was introduced at the 2010 FIFA World Cup in South Africa with the support of 28 team captains. Captains of six teams at the 2011 FIFA Women’s World Cup in Germany also endorsed the initiative.

At the Maputo event, the first Africa-wide launch of the initiative, the heads of national delegations to the Games, including presidents of National Olympic Committees and Ministers of Sport from 47 participating countries, are signing a pledge to support the Give AIDS the Red Card campaign for Zero new infections, Zero discrimination, and Zero AIDS-related deaths. The campaign aims to raise awareness and mobilize action to strengthen the response to HIV and accelerate progress across Africa.

“By signing the pledge, each delegation is agreeing to set up a national plan of action on the UNAIDS Give AIDS the Red Card in consultation with UNAIDS offices and national AIDS councils upon return in their respective countries,” said Dr. Djibril Diallo, Senior Adviser to the UNAIDS Executive Director. “The 2012 Africa Cup of Nations hosted by Equatorial Guinea and Gabon will be the next platform for pan-African mobilization of the initiative,” he added.

Sub-Saharan Africa continues to be the region most affected by HIV, with an estimated 22.5 million people living with the virus in the region representing 68% of the global total. However significant progress is being made in the region. In 22 countries, the HIV incidence rate declined by more than 25% between 2001 and 2009.

World leaders meeting in New York at the 2011 UN High-Level Meeting on AIDS agreed on far-reaching targets to halve new infections through sexual transmission and drug use, eliminate new HIV infections among children, and reduce TB-related AIDS deaths by half—all by 2015. The Political Declaration on HIV/AIDS also urged countries to embrace treatment for prevention, put 15 million people on treatment and reinforced the call for universal access to HIV prevention, treatment, care and support by 2015.

UNAIDS, the Joint United Nations Programme on HIV/AIDS, is an innovative United Nations partnership that leads and inspires the world in achieving universal access to HIV prevention, treatment, care and support. Learn more at unaids.org.