(The Daily IIJ) Stella Bangura is a final year student pursuing a Bachelor’s Degree in Business Administration at the Institute of Public Administration and Management (IPAM), University of Sierra Leone’s. She will be representing her country in the upcoming Miss West Africa Beauty Pageant in Banjul, The Gambia on 10th December 2011.
Speaking to this reporter recently, Miss Bangura said pageantry is not an easy task because it involves lots of commitment and dedication to market the country at international level. She reiterated the fact that pageantry in Sierra Leone is tagged for less important young ladies in society, and added that she is ready to sell the good image of the country abroad. “The more investment in the country, the more jobs for the people and it will help to boom the economy,” she said.

Stella is a famous Sierra Leonean that has represented her country in the Miss ECOWAS beauty pageant and Miss University Africa.
She is a philanthropist at heart, working with Zone SL, a charity organization and partnering with the Thinking Pink Breast Cancer Foundation and other charitable organizations. This has given her the opportunity to help make a difference in the lives of people. “My platform is Breast Cancer information dissemination and education for women and children as most women are yet to understand the dangers of breast cancer and how to prevent or cure the disease,” she told this press.

Stella who is currently working at Africell is a business magnate in the making and hopes to become an influential woman of substance and a successful owner of a multi-national business and a charitable foundation. “I am very grateful for each day and step I take and honour every one of life’s gifts! … The journey begins at home,” she said.

Sierra Leone’s Minister of Tourism and Cultural Affairs, Victoria Saidu Kamara said since her Ministry is responsible to promote the true picture of Sierra Leone’s culture, they are very happy to partner with Miss Bangura to represent the country.

Miss West Africa International to be staged in The Gambia 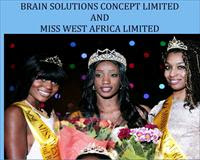 According to a dispatch from the Brain Solutions’ local agents SASS Modeling and beauty Agency, the Miss West Africa 2008 and 2009 held in the UK and won by Amina Kamara and Shireen Benjamin respectively, was judged the “most popular and the most professionally organised African pageant.”
The organisers say government and the people of The Gambia have shown a keen interest to promote all the objectives of the Miss West Africa vision. The organisers threw their weight behind the desires of the government and the people of The Gambia, hence their decision to host the event in The Gambia. However, plans are in the pipeline to showcase the event in Nigeria as part of their strategy to promote the event in future hosting country.

Regarded as the biggest and the most popular international African pageant, Miss West Africa was founded in the UK by Nana Tamakole with the aim of promoting a positive image for West African by creating awareness of economic, social, cultural, environmental, health and beauty issues within West Africa.
However, the pageant also showcases a variety of beauty and talents of West Africa women from around the world. It brings you one lady who possesses not only natural beauty, poise, great talent, and a charitable heart, but the intellect to represent West Africans worldwide as their ambassador.

“The grand event is more than a pageant. It will be a week long one which will display the vibrancy of West Africa. It will showcase the rich culture, tradition and heritage of the West African people. It will show the rest of the world the tourism potentials and opportunities the region has. The main night will display artistic talents in terms of the musical and fashion abilities of the people as well as celebrates iconic figures of the continent,” the release ended.