ELECTIONS AND STABILITY IN AFRICA 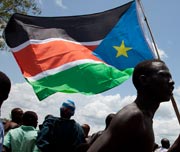 25-27 April, 2011
Banjul, the Gambia
Chair of the panel, panelists, fellow Africans and friends of Africa,
It is a great opportunity and a pleasure for me to have this chance to share with you discussions on elections and stability in our continent African. I will share with you my experiences and opinions as African domestic elections observer in my country Sudan which had two electoral processes of
•         Political legislative and executive elections April 2010 and
•         Political referendum on self-determination for the south Sudanese population from the rest of Sudan 9th July 2010
If elections are defined as “voting for our leaders and representatives in the government according to our own individual will without any threats that creates fear or favor”
Then elections are the measuring yards for leveling political forces and their followers’ commitment for democracy.
Remember, elections are totally political processes for accessing state political power whether being legislative or executive
Then the question is “what democracy for us-Africans is”? Remember that majority our political parties in Africa are built on the foundation of ethnic politics not ideological politics.
The evidence for our ethnic politics is, majority of our African voters/citizens feel they are represented in the government not by political ideology but by having their ethnic member, close friends/alliances, [1]regional or religious member in the government
Therefore, fellow Africans and friends of Africa,
The virus that is turning our Africans elections into violence or creation of instability with reference to our recent countries elections such as Kenya elections of 2007, current elections in Ivory coast and Nigeria is due to our strong underline of elections politics by the three aspects I mentioned above as;
•         Ethnic political representation
•         Political representation because of alliance/friendship
•         Political representation by religious or regional affiliation
Then our elections political campaigns are originated by those thoughts. Same thoughts prepare our WILL for accepting the elections results or trust on the elections management and administration.
With that political thought, is automatic that candidates contesting during elections will strongly want to reform the elections law/framework meaning , commission, Judiciary, national security institutions and other law enforcement agencies ( police and army) functions and roles to be IN THEIR FAVOR in order to  succeed in the elections by any means whether by democratic chance or not.
In this point, it means political power exchange will not be BY ACCEPTING defeated through democratic political formula (i.e. the power of voters’ votes)
So, fellow Africans and friends of Africa,
To talk about elections and stability in African it is necessary for us to find answers to the following questions below (before elections, during elections and prior elections results);
•         What is the relationship of the elections contesting candidates to the elections commission leadership, Judiciary, and national security and other law enforcement agencies?
•         Candidature linkage to state assets during elections processes
•         What length of time is allowed for elections civic education and political campaigns?
•         What is the statue of the media in availing information and space for electoral process messaging?
•         Nature of political platform in which political parties involved in the elections are set on?
Answers to these questions will help us in understanding the aspects centered on the followings;
o   Independence of the elections administration and management institutions such as commission, judiciary, national security and the other law enforcement agencies
o   Availability of balance political space for civic engagement of citizens and candidates
o   Neutrality of the media and the media distances from instigating violence or promoting peaceful and non-violent electoral environment
o   Non-utilization of the  state/public assets by the contesting candidates
o   Our civic obligation as citizens for respecting, fulfilling and enforcing the rights and freedoms relate to adequate access of information, association and assembly
o   Legal chance for using the law in cases of legal appeal or legal petition over elections administration or management  manipulations
If the answers that we got are not inline with these thoughts then the electoral processes association with;
•         Obstruction
•         Harassment
•         Intimidation
•         Denial
•         Arrest and detention
•         Manipulation of legal framework, law-provisions and results is non avoidable.
Here it is the issue of dedication to “THE POWER OF VOTERS’ VOTES”
This is where instability is created by our elections in most of our African countries elections.
For recommendations and way forward,
a)    There is a need for our African regional and national institutions to start thinking about strengthening the independence of elections administration and management institutions
b)    Electoral and media legal framework reforms for embracing democratic approaches for peaceful and non violent elections is paramount
c)    Political platforms for parties engagement for elections to be based on democratic principles of respecting human dignity, rights, freedoms and rule of law in which protection of citizens lives and properties is non negotiable
d)    Elections processes observation taken as a serious tool for ensuring commitment for creditability of elections. In which the creditability of the elections is defined by the principles of non-rigging, acceptance of voters decisions/choice that determinates the results, free and fair electoral processes necessity should not be play with
Fellow Africans and friends of Africa thank you very much for listening
By Mr. Edmund Yakani
National Coordinator
Sudanese Network for Democratic Elections (SuNDE)
[1] Regional mean community among communities in the state
Posted by Modou S. Joof at 20:49