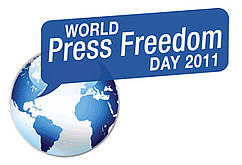 “21st Century Media: New Frontiers, New Barriers” is the theme of this year’s World Press Freedom Day, celebrated on 3 May, with major events in Washington DC and New York (USA), alongside local and regional events all over the world.

The Washington conference (1 to 3 May), co-organized by UNESCO with the U.S. State Department and over 20 civil society partners, will examine the growing role of the internet, the emergence of new media and the dramatic rise in social networking in recent years. The Director-General of UNESCO, Irina Bokova, will open the conference alongside Judith McHale, Under Secretary of State for Public Diplomacy and Public Affairs, U.S. Department of State.
Speakers at the conference will include bloggers and internet journalists from North Africa and the Middle East, as well as other media and freedom of expression professionals from all over the world.
On 3 May, Ms Bokova will award the UNESCO/Guillermo Cano Press Freedom Prize. Imprisoned Iranian journalist Ahmad Zeidabadi is the winner of this year’s prize. The award-ceremony will take place at the National Press Club in Washington DC (3.30 to 5 p.m.).
This year’s World Press Freedom Day also marks the 20th anniversary of the Windhoek Declaration for the promotion of free and pluralistic media. The Declaration was adopted after a conference held in Windhoek (Namibia) on the development of a free African press. It emphasized the importance of an independent press for the development and preservation of democracy and economic development. Two years later, the UN General Assembly established World Press Freedom Day.
The anniversary will be commemorated at a special event at United Nations Headquarters in New York on 4 May. On the same day in Windhoek, a regional conference will be held to review the future of the media in Africa. A publication analyzing media freedom in Africa over the past two decades will be launched on this occasion.
Also noteworthy are the celebrations of World Press Freedom Day in Tunisia and Egypt, where journalists are now able to work more freely and exercise the right to freedom of expression.
29.04.2011
Source: UNESCOPRESS
Posted by Modou S. Joof at 10:44