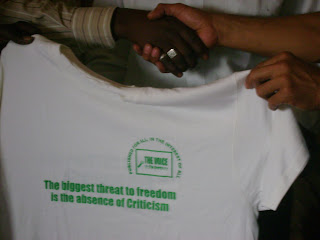 A household material shop on number 32 Sayerr Jobe Avenue, Serrekunda, Bambo Enterprise has donated T-shirts to The Voice, a privately-owned newspaper on Tuesday May 10, 2011.
The t-shirts bears on the front, the inscription “The biggest threat to freedom is the absence of criticism” and the logo of the paper and its tag “Published for all, in the interest of all”, while the back is written “Bambo Enterprise”.
The owner of Bambo Enterprise Abdul H. Saksouk, alias Bambo Ceesay earlier on proposed to give t-shirts to the paper in recognition of the good work and the neighbourly relationship that exist between employees of both businesses.
During a presentation at the office of The Voice along Sayerr Jobe Avenue, his employee, Musa Ceesay noted that the gesture is not the first of its kind made by the Bambo Enterprise.
He said his boss is a clean-hearted person who cares for people around him. “The relationship will be useful for both sides, and I am hopeful that the two sides will join hands for the betterment of both businesses,” he said.
“Bambo Enterprise has been contributing to the socio-economic development of The Gambia and I believe that in future, more benefits will be derived from the relationship.”
Mr. Alh. Saidy Faye, Financial Manager for The Voice commends Bambo Enterprise for the gesture, and also hopes that the relationship will grow from strength to strength.
He stressed that though the paper is still young, it has the potential to grow like any other newspaper in the country, thus in as much as it reports on critical events that have a direct or indirect impact on society, it also welcomes recognition of this kind.
The Voice Newspaper, published by The Voice Media Company Limited was established in 1999 as “The Inquirer”. It went off the news-stand in 2003 as a result of resource constraints.
In August 2008, the paper was renamed to “The Voice” and has since maintained its editorial independence and remains committed to telling the stories of Gambia to Gambians, citizens and residents alike. Source - The Voice
Posted by Modou S. Joof at 21:00