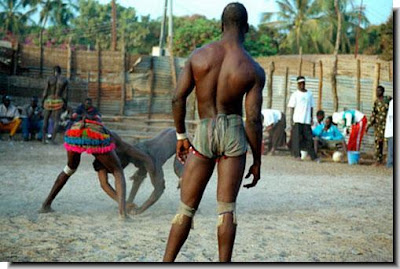 Gambia Government’s housing company on May 28, donated in Cheque an amount of D100, 000 to the Organizing Committee of the National Wrestling Championship.

Social Security Housing and Finance Corporation’s (SSHFC) donations add up to an earlier donation of D10, 000 from the Embassy of China on Taiwan in Banjul.

The organisers are targeting D1.5 million to stage the maiden edition of the championship, which have now been schedule from June 29 - July 1, 2012 at the Serrekunda West football field.

The current money acquired is not even up to a thirdof the budget allocated to the event but the oragisers hope donors will respond in time for the event.

During a May 22 press conference, when no date or venue was identified, Pa Suwareh Faye, Deputy Director of Youth and Sports told journalists “Sponsors have started coming” but noted that Gambian President, Yahya Jammeh is the “main sponsor of the event.”

The Gambian leader is yet to announce his financial commitment to the championship, but it is well understood that he is the “main force” behind the organisation of event.

He had committed D20, 000 to each of the seven administrative regions of the country when he set in motion the regional wrestlers’ selection process, with the aim of setting up a national wrestling team at the end of the final championship for future representation of the country at international competitions.

All regions are confirmed to have forwarded lists of 10 competitors each to represent them in the national championship.

The organisers said the national wrestling championship is aimed at improving the sport that began as a traditional village activity. Such efforts have been set in motion by a resource-constrained Gambia Wrestling Association, wrestling’s national governing body.