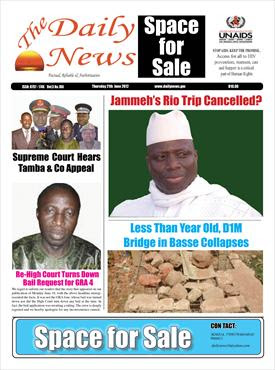 High Court Judge, Emmanuel Nkea on Tuesday ordered for the arrest of one Lamin Touray, said to be a “reporter” of The Daily News, a privately-owned a local newspaper in the Gambia.

Nkea, presiding over the an Economic Crime trial involving officials of the Gambia Revenue Authority, GRA, at the Special Criminal Division of the High Court in Banjul, said the “journalist” reported falsely on the previous sitting on the case.
When the case resume on June 19, 2012, Nkea asked: “Who among you (Journalists) is the reporter of The Daily News.” “Is not here,” the journalists who were present replied in chorus.

“What is the name of the reporter,” Nkea asked one more time. “I think is Lamin Touray,” an interpreter at the court replied.

That Lamin Touray issued false information on the proceedings of my court, said the Cameroonian judge, who added “I shall order for the arrest of Lamin Touray of The Daily News to be brought to the court and explain why he should not be charge with contempt of court.”

The Voice newspaper understands there is not a reporter at The Daily News going by the name Lamin Touray. The Paper’s editor confirmed they’ve not been contacted on the matter yet.

The article in question titled "High Court Turns Down Bail Request for GRA 4" is actually authored by Lamin Njie.