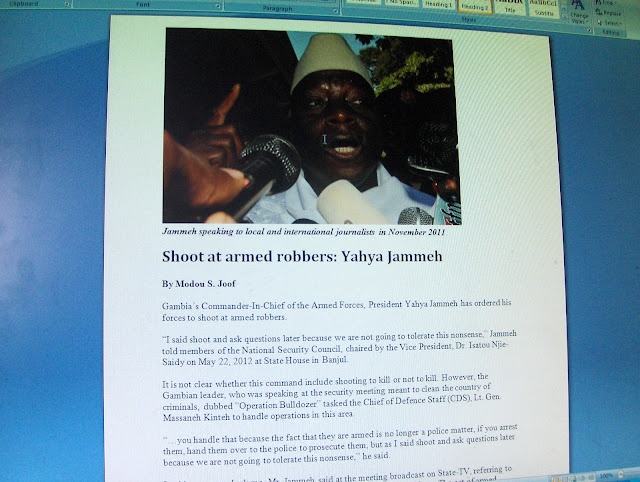 One of the world’s leading human rights agency, Amnesty International said it is deeply concerned about President Yahya Jammeh’s recent instructions to the security forces to “shoot first and ask questions later” in an attempt to rid the country of “armed robbers”.


“I said shoot and ask questions later because we are not going to tolerate this nonsense,” Jammeh told members of the National Security Council, chaired by the Vice President, Dr. Isatou Njie-Saidy on May 22, 2012 at State House in Banjul.

But Amnesty is calling on the Gambian President to immediately announce that the use of lethal force is only allowed when strictly unavoidable in order to protect life.

“The President must ensure that the security forces carry out their duties in compliance with the Gambia’s international human rights obligations and international standards on the use of force and firearms,” it said in a May 31 statement.

The Gambian leader did not made clear whether his order include “shoot to kill or not to kill”, when he spoke at the security meeting meant to “clean the country of criminals”, which he called “Operation Bulldozer”.

“…you handle that because the fact that they are armed is no longer a police matter, if you arrest them, hand them over to the police to prosecute them, but as I said shoot and ask questions later because we are not going to tolerate this nonsense,” he told the Chief of Defence Staff, Lt. Gen. Massaneh Kinteh.

The Operation will see the creation of permanent task force to begin its mandate on 28 May 2012, however, as of Thursday, Amnesty said the Operation has not yet been implemented, according to the Inspector General of Police, Yankuba Sonko.

The organization is concerned that such orders to shoot “armed robbers” is a violation of the Gambia’s international human rights obligations.

‘Even if they are accompanied by instructions restricting when police may shoot to kill, it may give the police the message that it is acceptable to use lethal force as a first resort,” it said. “In any case, the use of firearms should be regarded as potentially lethal in all circumstances, and firing at a suspect, regardless of where an officer aims, can result in death.”

Lethal force must only ever be used as a last resort to protect life and only when less extreme measures are inadequate, the agency added, warning that President Jammeh’s proposed hard-handed crackdown on criminal activity will lead to human rights violations.