W/African Journalists Urged To Be Cautious In Conflict Reporting 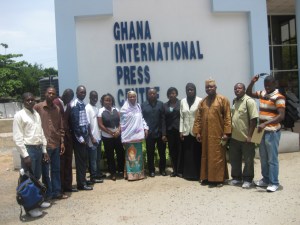 West African journalists have been admonished to be cautious in reporting on conflict situations in the sub region that has been engulfed by wars and instabilities for the past two decades.
The journalists were told that they have to practice conflict sensitive and peace reporting and avoid forms of reportage that have the propensity to fuel and escalate violence and destruction.
The reports of the media has the propensity to escalate conflict…therefore “media practitioners need to demonstrate professionalism in the use of language when reporting on conflict
situations,” Mr. Albert Sam, Public Relations Officer of the Graphic Communications Group, Publisher of the largest newspaper and publishing house in the Republic of Ghana, told the journalists.

Mr. Sam gave the admonition last week when he addressed 15 West African journalists from six countries including Liberia, Sierra Leone, Gambia, Nigeria, Togo and Ghana, who are attending a two-week intensive
training on conflict reporting and resolution in Accra. The journalists, as part of the training program, had gone to tour the Graphic.
The training is being sponsored by the International Institute of Journalism of INWENT, the German government’s capacity building organization. West Africa is branded as one of the hotspots for violent conflicts in the world. For the past two decades, civil wars and violent political conflicts have engulfed the region including those in Liberia and Sierra Leone, Guinea Bissau, Cote d’Iviore, Senegal, Niger, and
Guinea, among others, killing hundreds of thousands of people and destroying millions of dollars worth of properties.
These conflicts have also forced millions into refugees and displaced camps, increased poverty and retarded development. It is reported that the media has played a significant role in either escalating or resolving these uprisings, based on their reports, stressing the need for training of journalists in the region to report
in such a way that conflicts can be avoided or resolved.
Mr. Sam, a veteran Ghanaian journalist who covered the conflict in Liberia and the country’s 1997 elections, said the role of the media in conflict resolution or escalation can not be overemphasized, as “the pen, used by journalists is mightier than any weapon of mass destruction”.
“As a journalist myself, I have rich experience from reporting on [several] peace keeping operations – United Nations Interim Force in Lebanon (UNIMFIL), the United Nations Truce Supervision Organization
(UNTSO) in the Middle East, the ECOWAS Monitoring Group (ECOMOG) in Liberia,” he said.
“In all these,” he furthered, “what I learnt and experienced, which is imprinted on my mind, is the need to indeed exercise caution and desist from inflaming passion.” He said journalists must not take side in a conflict situation, but to remain neutral in reporting the facts, being cognizant of their social responsibilities.
The Ghanaian journalist then set three examples of “negative” media reports in Ghana, Kenya and India that escalated the conflicts and claims lived.
During the Kokomba and Nanumba ethnic clashes (in Ghana) that claimed tens of lives, Mr. Sam said, one of the major problems that inflamed passions was a press statement issued by the military that “the Kokombas were the aggressors” instead of saying that the Kokomba were aggressive.
This statement, he noted, led to the Kokomba taking serious offence and accusing the military peacekeepers of taking side. In the Kenyan example, Mr. Sam relate that two Kenyan drunkards fought in the in a bard. The next day, the media reported that a “Leo” and a “Kikiyu” (two bitter rival tribes) had fought without stating the mental conditions of the combatants but played on the deep-seated animosity between the two leading ethnic groups in the country.
According to the Ghanaian journalist, the consequence of such reporting was widespread communal fighting between the two tribes across the length and breadth of the country, leading to fatalities.
In his final instance, the Graphic Communications PRO explained that during the death of the former Prime Minister of India, Indira Ghandi, the media reported that the Prime Minister was killed with two of his
“Sikh” bodyguards. The report, he stated, led to reprisal attacks on the Sikh.
“The media could have just reported that the Prime Minister was killed by two of her bodyguards, he noted.
Mr. Sam said all of the above examples led to escalation of the conflicts, resulting into avoidable deaths, with the media to blame. “My advice therefore is that in any conflict situation, we [journalists] must try to be neutral while it rages on,” he said, adding, “For that is not the time to pass judgment on who is wrong or right.”
The Informer’s News Editor and Moses Varfee Kowo, the Legislative reporter of FrontPage Africa are representing Liberia at the training. They were selected, through a rigorous process, among several Liberian
journalists who applied for the program.
Posted by Modou S. Joof at 10:56