Sharing My Experience From Ghana, Part 2: A Memorable Flight To Accra 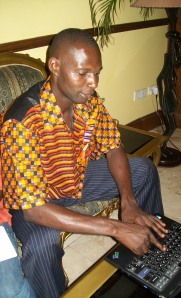 The author, D K Sengbeh on his laptop at the HighGate Hotel in Accra
It was a day of mixed weather: the sun initially showed its sweltering prowess, making everywhere hot. Then, it became cloudy. Large droplets of rain came down, hitting the soil unfeelingly, for a while; then, the sun showed its face again, this time not as sizzling as the previous.
By 18:15, Saturday, April 17, 2010 we were already seated on board the huge Kenyan airliner, KQ 0509. The pilot ignited the engine and left it beating momentarily, warming up for a nearly two-hour flight. We, not quite 200 passengers, had waited for hours, aching to get on board for our destinations. We had expected
The two Liberian journalists, Moses Varfee Kowo and D K Sengbeh standing under their country's flag (second from right) hoisted among several other flags at the Kofi Anna Institute in Accra, Ghana 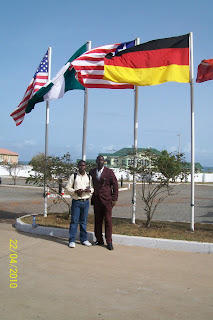