Sharing My Experience From The National Arts Center In Accra, Ghana 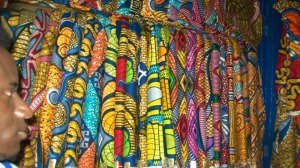 Some Ghanaian fabric at the Art Center in Accra
The sun wasn’t hot as usual, but it was hotter than a hot day in Monrovia. I did not get up as early as usual. We had been told the day before that we would visit the Art Center and the Accra Shopping Mall, the largest in West Africa, I was made to understand. I was not really impressed about going to the Art Center. I had been there before, in 2008, when Accra was jam parked, days ahead of the kickoff of the 2008 African Cup of Nations that was being hosted there.