The fear of insecurity that your calls or conversation are being monitored or recorded by telecom operators or the National Security in Ghana should be a thing of the past, according to Stephen Odoi-Larbi, the parliamentary correspondent of the Accra-based Ghanaian Chronicle.
In his parliamentary report on June 9, Mr. Odoi-Larbi noted the Minister for Communications, Haruna Iddrisu, has given the assurance that there is no law in the country’s statue books that allows telecom operators, individuals, or National Security to record or tap into peoples’ conversations.
“The Ghanaian law does not allow for eavesdropping or tapping of telephone conversations by any person or institution, including National Security and the telecommunication entities themselves. Not even lawful interception is permissible in Ghana,” Mr. Iddrisu was quoted to have said, while responding to a question posed by the Member of Parliament (MP) for Takoradi, Kwabena Okyere Darko-Mensah, on whether any of the six telecommunication companies operating in Ghana had a device that records, listens into, or taps the conversation of citizens of this country.
Monitoring device
Two years ago, free expression came under threat in the Gold Coast of Ghana as the Government was working towards installing an Intelligence Signal Management System (ISMS), a monitoring device allegedly meant to undermine the right to free expression.
“The Government of Ghana entered into an agreement with a telecommunication company, Global Voice Group, to install the device on the international gateways of companies engaged in mobile telephony in the country in 2009,” a pro-opposition pressure group, Alliance for Accountable Governance (AFAG) said.
This compelled AFAG to file a suit against the government at the Human Rights Court in the capital, Accra. The hearing of which was on June 16, 2010. And as reported by the Media Foundation for West Africa (MFWA), the pressure group was asking the Court to restrain the Ghanaian authorities from installing the ISMS.


Rights violation
AFAG asked the court to suspend this installation, until the authorities put in place mechanisms that would ensure strict compliance of the privacy laws in the country. The writ demanded that the court declares the installation of the ISMS as “illegal”, “unconstitutional” and a violation of the fundamental human rights of the citizenry”.
However, the Government of Ghana said the device would help minimize the loss of revenue from international calls. But AFAG rejected the government’s position, saying the device could also be used in tapping into the Short Message System (SMS), online bank accounts, and internet communication of all mobile phone and internet users in Ghana. 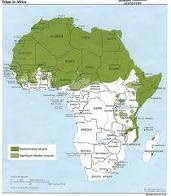 One among peers
Ghana has been recognised as a symbol for democracy, good governance and freedom of expression among peers on the African Continent, repealing draconian media laws in the country’s main legal document, the Constitution.
There by paving the way for an Independent Media Commission that has been mandated to regulate the Media, though it came under attack sometime ago as to how credible it is.
Nonetheless, the proposed installation of the ISMS monitoring device received stern opposition since it was perceived to be aimed at “stifling” free expression. And seemingly, the country was just about to derail from the good name it earned over the years, for the “wrong reasons”.
Posted by Modou S. Joof at 11:45