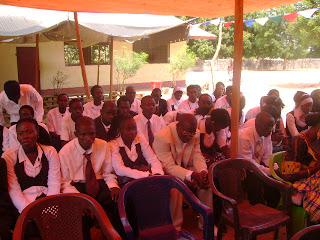 Berending Senior School graduates first batch
Berending Senior Secondary School, Lower Niumi District on Saturday held a graduation ceremony for its first batch comprising of 122 candidates.
Three years ago, the School, a junior secondary school, decided to establish a high school to accommodate the ever increasing numbers of enrolments and offer access to Senior Secondary School education to the surrounding villages and the North Bank Region as a whole.
On May 28, 2011, a host of parents and guardians, friends and even onlookers from within Berending and the satellite villages joined their graduating sons and daughters at the school ground to mark the maiden event.
“We started the senior secondary school with skepticism, but nothing is impossible and we are aiming to challenge other high schools in the country in producing the best students,” he said.
“The school administration has achieved a lot by providing a basicycle to student living in satellite villages and also receives some education materials from philanthropic institution.”
He urged the community to support the students at home and encourage them to attend extra classes.
A representative of the Regional Education Director, Mr. Lamin Bojang noted that the establishment of the school is a step in right direction. He added that the regional education and the Ministry of Basic Education are with Berending in their scause to deliver quality education.
He cautioned the graduates to deliver what they learn from school and make sure that they do not sideline their families in their quest to further their education or find jobs in urban centres.
“Remember that they have given you what they have, it is up to you to reward them, your communities and the country,” he said.
Guest Speaker, Mr. Jenung Manneh, Registrar of the University of The Gambia and a native of Berending, said education is the process of transferring knowledge, skills and value to each other which is a worthwhile sustenance of societies.
Mr. Manneh said quality education contributes in uplifting the ambitious dreams of young people for optional personal fulfillment in order to contribute as effectively as possible to their various societies.
He note that it acts as a catalyst and a key instrument not only for future economic development but also for social, cultural and political change which attempts to foster national identity and develop local human resource and capacities to receive and apply knowledge and technology.
“Young people attempts to take care of loneliness, despair and cynicism which have been engendered by the events around them, and the sense of hopelessness which marks the lives of so many people useless,” he said.
Prices were given to deserving students in recognition of their academic performance, while certificates were issued to the School Councilors for the services rendered to the school.
GFA beach soccer coaching course ends
A weeklong “beach soccer coaching course” organised by Gambia Football Association (GFA) in partnership with the International Federation of Football Association (FIFA) drew to a close in Banjul on Friday.
The closing came on the day after the death of Gambia’s most successful referee, Mr. Badou Jassey. The Secretary General of the GFA Jammeh E.K. Bojang said they are saddened by the dead of Mr. Jassey, who was the Chairman of the Referees Committee in Gambia.
“We want to send our deepest condolences to his family and the sporting fraternity in the country,” he said.
He also commended FIFA for giving Gambia the opportunity to learn the rules of Beach Soccer by providing them with a course director from Brazil. Beach Soccer is the 27th sporting discipline to be initiated in the country, and Mr. Bojang hopes Gambia will qualify for the forthcoming Beach Soccer World Cup in 2013.
Brazilian Mr. Gustavo Zloccowick, the Course Director who also paid tribute to the late referee, said the course has been a great experience for him and his profession.
He said the first step of establishing the latest sporting discipline in the country has been undertaken and the second step rest with the participants to develop the sports in the Gambia.
Mamudou Max Jallow, Executive Secretary National Sports Council describe the course as a “unique selling point” in their effort to popularize beach soccer in the country.
He noted that the training programme highlighted the crucial role in building lasting friendship, cooperation and understanding between the coaches and their instructor.
He exhorts GFA officials to follow the emerging trends in football around the globe and find ways and means to attract large crowds in league matches.
“The first step in creating a well structured league is to create a committed fans-base. A professional league can only thrive where there is a committed group of fans who attend matches regularly, follow the progress of their teams everywhere and possibly pay membership fees,” he said.
He charged that talented boys and girls should be accorded equal opportunities to physically express themselves and must be assigned to competent and qualified coaches to carry out such exercises.
“For beach soccer to make any meaningful impact, the GFA must come up with a long-term plan that will result in the creation of a viable league and national teams in the near future,” he concludes. Courtesy of The Voice Newspaper
Posted by Modou S. Joof at 21:33