From Refugee to Role Model 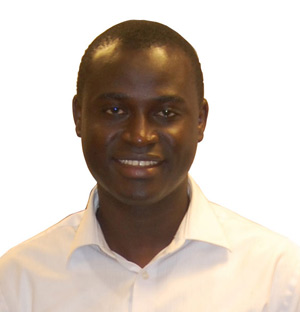 Omar Bah is a refugee from Gambia. While in Gambia, he worked as a journalist for a local newspaper. Omar wrote about current issues of human rights and corruption. After seven years at his job he was declared “wanted” and had to escape. Since most of his colleagues had been killed, he feared losing his life. Omar left his family, including his wife of two months and exiled to Ghana for temporary safety. In May 2007, Omar arrive at his new home in Providence, Rhode Island.
Arriving to a “new world” Omar felt alone and lost, but was determined to start a new life. Social media sites such as Skype and Face book have been a great help in allowing him to remaining in contact with his family and friends who still live in Gambia.
Landing a job with The Rhode Island Housing and Mortgage Finance Corporation, Omar found himself just across the street from the URI Feinstein Providence Campus. He would frequently notice advertisements for information sessions and various programs offered.
After exploring his options with continuing education staff, in the fall of 2008 he enrolled in the Communications studies program with a minor in Political Science. Omar likes the convenient location of the downtown campus, the small size of the campus, and the supportive environment. “There is always someone to help if you need it, and I liked that.”
Admitting it hasn’t been an easy experience, juggling work, a new family and his course load, Omar is happy to always have his wife’s strong support. Her support eventually turned into interest in obtaining a degree as well. “My wife says I was her inspiration for enrolling at URI”. Omar’s wife recently enrolled in the Biotechnology program on the Providence Campus. Now with both of them enrolled in classes, a new baby and a full-time job, Omar works extremely hard to maintain his outstanding grades. At times it is difficult. Omar spends much of his spare time in the library. Omar finds Gayla Gazerro, scholarship and financial aid coordinator, to be a great mentor to both him and his wife. “She is our biggest supporter and is always encouraging. The Feinstein scholarship has been a great help.” Omar describes the Providence campus as a second home.
When asking Omar if he had any words of advice for future or current students? He replies, “Make yourself believe you can manage everything. Dedicate your time and all your hard work will pay off.”
Currently, Omar is working to establish the Refugee Advocacy Program. This is a new program which will officially start in June to help refugees with their transition to America. Omar will serve as coordinator of the program which will help refugees find safe and affordable housing, assistance in obtaining suitable job placement and provide after school care for their children.
He is proud to say that he completed all his classes and will be graduating this May. He is very much looking forward to walking across the platform and accepting his degree which he will display proudly. Recently, Omar was recognized by the International Institute of RI for his achievement and received an award from the African Alliance of Rhode Island recognizing his accomplishments and his standing as a role model for others in the community. Source - University of Rhode Island
Posted by Modou S. Joof at 20:40