Silence and gossip under the corridors of the GTUCCU

Silence will break if the gossip goes on within the corridors of the Gambia Teachers Union Credit Cooperative Credit Union (GTUCCU).
No stress can shadow the idea of elevating the financial status of the teachers in the country but the managerial system of their shared institution can be questionable, writes Ebrima Bah. 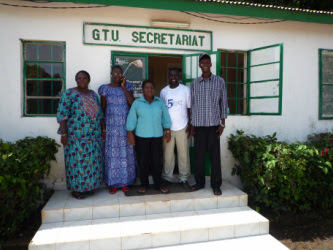 It sounds interesting when a concerned member of the Teachers’ Credit Union argued that the management of the GTUCCU and its board members are accumulating fats in their bodies thanks to funds belonging to the teaching fraternity in the country.

This observer could tell that many former teachers sometimes called “Run Away Teachers” (RATs) now sit in Air-conditioned (AC) offices holding lucrative position just to formulate policies in their own interest.

“The top officials among them have seemingly acquired diplomatic travelling passports and are navigating the world in the name of teachers in this country. Yet there is no change for the better”, the teacher said.

Yes! The GTU credit union is on “crisis”. If you look at the credit union today “we have a magnificent building but in terms of operations we are on the sponge because our reserve is the lowest”, Edrisa K. Bojang, the GTUCCU Board Chairperson said.

But crisis was not foreseen by the founding fathers of the credit union fifteen years ago. Veteran educationists agreed to establish the union to “provide fair, honest proactive leadership and the requisite skills and knowledge to steer the credit union in order to provide teachers the ideal sound and safe environment to invest and depend on for micro finance products.”

Henceforth the credit union was expected to victoriously strive for decent living and working conditions for members by creating easy access to affordable, productive financial services.

Running the affairs of this noble initiative today is as mixing oil and water. “There is never a unanimous agreement among them at meetings”, observed a journalist covering GTUCCU functions.

The Annual General Meetings (AGMs) are just for formality but very few of the concerns raised by the ordinary members at these meetings are captured and adopted. As a result many teachers especially those in the provinces far away from Banjul would not waste their time and resources to attend the GTUCCU annual general meetings.

Late attainment of the required percentage of members present to make up the quorum is noticeable in several AGMs in the past.

The board chairman of the Gambia Teachers Union Cooperative Credit Union this year admitted that one of the “original sins” they were dealing with for long is “giving the task of determining interest and operational charges to the AGM” which he said is “against convention and common sense.”

According to him the GTUCCU realised that “service charges should depend on market forces in the environment we operate and the Board should determine what is reasonable.”

Members argued that it is becoming clearer that more and more reforms of their credit union are confined within the cooperative’s leadership class and it’s neighbourhood but not to the ordinary member in the classroom and in village schools.

The GTUCCU is battling with this challenge. “Member education must be reactivated. People need to know what is a Credit Union and not comparing it with a Micro-finance Organisation”, stated the Board Chairperson.

The importance of the GTUCCU and the services it is forcing its members to enjoy “at low cost” is not commendable by majority of its disgruntle members partly due to lack of awareness of the country’s educators.

Take a look at the recent “Shareholding Reform”. When it was introduced in the year 2009, each member was required to have a share of three hundreds dalais (D300). Last year the credit union came up with a resolution which states that all teachers must have two shares of three hundreds (D300) each and every year.

The cost of operation for the credit union has also increased from D14.17 to D50 monthly for all teachers. To that effect, the management of the GTUCCU explained that the previous amount was clearly unsustainable due to rising cost of maintaining a model credit union.

It is understandable that teachers in different schools and regions continue to helplessly cry for the “unjust” deduction they persistently realised on their monthly salary payslips as “unknown cost” for services of the GTUCCU.

Growing complains from teachers in the service is becoming a threat to the incoming youngsters. A newly qualified teacher in Higher Teacher Certificate (HTC) category rejected a GTUCCU membership forms distributed at his school of posting. Like many other potential members of the credit union, this teacher fears of getting cheated by the credit union each day and month of every year. He automatically chooses to join the bank line and not credit union for monetary transactions.

Mr. Bojang, the GTUCCU board chair explained that members of the credit union must bear the responsibility of owning their organisation which involves cost to run its operations. “If you take the cost of operation on your own and do it then you will have a better return tomorrow and the organisation will be able to build up a good reserve”, he said.

Time has come for all teachers across the country to inevitably subscribe to the GTUCCU.

Baboucarr O. Joof, General Manager of the Gambia Teachers’ Cooperative Credit Union (GTUCCU) said the credit union was compelled to request the salary payment function from Government after tumbling on a policy that targeted removing the current system which takes “pay masters” round schools to pay teachers.

He noted that operations in all regions are costly but essential to reduce their dependence on Banks, absenteeism, and other collateral costs associated with receiving salaries there. “Management expects every Regional (Education) Directorate to operate one branch in 2012 with a full complement of staff able to render all services accessible in Kanifing”, the GTUCCU headquarters.

Within fifteen years of existence, the Gambia Teachers Union Cooperative Credit Union has build homes for its members under its loan scheme. The credit union has among others “saved people from their hospital bills, and enable them to be business entrepreneurs as well as upgrade them up to university level in their academic careers through their GTU credit union membership”, the GTUCCU Board Chairperson said.

On the reason for cutting down teachers’ salaries, Haddy S. Njie the GTUCCU Treasurer explained that there is a double increase in volume of transactions regarding loans to the credit union’s members. “Our loan book grew by D17, 259, 377 to D55, 349, 443 representing 45.3 percent”, she said.

In the pipeline now are the Consumer Cooperative Unit and the Health Care and Insurance Scheme, which their General Manager said is ready now for takeoff.

This increase according to the GTUCCU Treasurer was due to the resolution passed in 2011 that annualised membership shares.

She assured teachers that the GTU credit union is determined to remain steadfast and prudent in managing their funds.

He writes for the privately-owned The Daily News newspaper in Gambia and The Gambia News & Report Weekly Magazine.
He is the publisher of Campus and Field News.