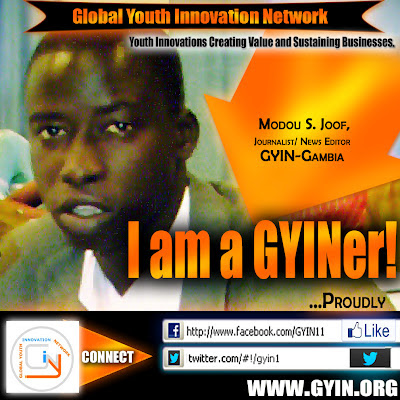 The Global Youth Innovation Network Gambia Chapter, GYIN-Gambia on Sunday launched the “I Am a GYINer National Campaign” at the Offices of The Voice newspaper along Sayerr Jobe Avenue, Serrekunda.

The launch of the Campaign supported by Phelps Stokes and the International Fund for Agricultural Development, IFAD, coincided with celebrations marking International Youth Day 2012 on August 12.

The I Am a GYINer National Campaigns, set in motion by the United States-based GYIN International, is meant to establish GYIN in 100 countries by December 2014.

He added that the campaign is also intended to “Form partnerships with local organizations (including government and media) to advocate for youth entrepreneurship; Showcase successful youth entrepreneurs and collect best practices; and Increase the visibility of young entrepreneurs’ businesses, products, and services.

“The central event of each I Am a GYINer National Campaign is business-oriented competition,” said GYIN-Gambia Secretary Meita Touray in her welcome remarks. “The competition has two categories: Best Cultural Product and Best Socially Conscious Business.”

She explains that the former seeks a service or product that exemplifies the country’s culture or locally available resources, including traditional clothing or accessories, traditional music or dance, traditional art etc.
The later seeks an existing business that exemplifies the belief that businesses should respect and enrich their communities and environments. “Prizes will be awarded to the winner of each category,” she said.

On 17 December 1999, the UN General Assembly endorse recommendations made by the world conference of ministers responsible for youth in Lisbon that August 8-12, 2008 be declared International Youth Day.

The theme of this year’s commemoration is “Building a Better World: Partnering with Youth” - which the designers said is a “global call to action to develop and engage in partnerships with youths.”

The Day is set aside for us young people to rethink our achievements and challenges, said Youth Activist and GYIN-Gambia Coach, Mr. Nfamara Jawneh, who was guest speaker at the event.

He described the theme as “right” hence it is calling for partnership with the youth. He demanded that young people be involved in government projects, policies and programmes specifically designed for the youth.

The lack of involvement of the youth in programmes initiated in the names of young people has led to the failure of many projects locally and internationally, said Mr. Jawneh, also a Deputy Editor at The Point tabloid.