YJAG BOARD INAUGURATION SLATED FOR THURSDAY 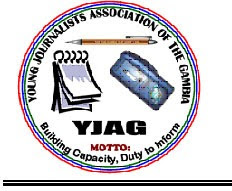 YJAG BOARD INAUGURATION SLATED FOR THURSDAY

A new board of advisers for the Young Journalists Association of the Gambia (YJAG) will be inaugurated on Thursday, July 19 at a ceremony to be held at the new secretariat of the Gambia Press Union in Fajara.

The six-member board consists of Njundu Drammeh of Child Protection Alliance as the chairperson, a representative of the Female Lawyers Association, Mr. Sam Sarr of Foroyaa Newspaper, Mr. Emil Touray President of Gambia Press Union, Mr. Momodou Sabally of the Ministry of Finance and Economic Affairs, and Mrs. Amie Bojang-Sissoho of Gamcotrap former chairperson of the board, and YJAG President Mr. Modou S. Joof as secretary to the board.

The board is designed to provide strategic guidance and a thoughtful advice for the Association and also to help ensure that the Association remains true to its aims, mission and vision.

Secretary General of YJAG, Mr. Lamin Jahateh, said the board members will promote and provide strategic direction for the development of the association including advising on fund raising activities, which has been one of the main challenges of the association over the past few years.
YJAG want to take this opportunity to thank all those who have been on the previous board for their hard work, dedication and commitment to the course of the association.

“We really appreciated their assistance and encouragement for putting the association on the right path to achieving our worthwhile goals,” YJAG President Mr. Modou S. Joof said.

YJAG was formed on 16th September, 2007 with the objective of promoting unity among young journalists in The Gambia; providing capacity building and addressing the welfare of its members, amongst others.

Legally registered with the Attorney General’s Chambers, the association is also tasked with the responsibility to facilitate the recruitment of young journalist into the profession, and operates under the motto “Capacity Building, Duty to Inform”.

YJAG has in recent years contributed tremendously the development of the media in Gambia, especially on capacity building and news reportage.