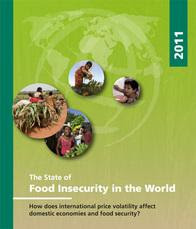 A joint report, by FAO, IFAD and WFP has warned that small, import-dependent countries, particularly in Africa, are especially at risk of becoming more vulnerable to poverty and food insecurity.

Many of them still face severe problems following the world food and economic crises of 2006-2008, the UN Food and Agriculture Organization (FAO), the International Fund for Agricultural Development (IFAD) and the World Food Programme (WFP) said in “The State of Food Insecurity in the World 2011″ (SOFI), an annual flagship report they jointly produced this year.

In the report, published on October 10, the three Rome-based UN agencies projected that “food price volatility featuring high prices is likely to continue and possibly increase, making poor farmers, consumers and countries more vulnerable to poverty and food insecurity.”
Such crises, including in the Horn of Africa “are challenging our efforts to achieve the Millennium Development Goal (MDG) of reducing the proportion of people who suffer from hunger by half in 2015”, the heads of the three agencies, Jacques Diouf of FAO, Kanayo F. Nwanze of IFAD and Josette Sheeran of WFP lamented in a foreword to the report.

The FAO’s best estimate of the number of hungry people for 2010 remains at 925 million, an increase of 75 million, compared to the 2006-2008 FAO estimates of 850 million. No estimates have been produced for 2011, as the methodology FAO uses for calculating the prevalence of hunger is currently under review.

The Gambia is a “small, import-dependent country” and in recent years, the hunger situation has been noticed to getting worst.
“The hunger situation is not getting any better, the percentage of the population below the minimum levels of dietary energy consumption is on the increase, with 15 percent in 1990 and 35 percent in 2008,” lamented Siga Fatima Jagne, a senior official of the Advocacy Group, Pro-poor (Pro-PAG), during a UN Development Programme Forum in December 2010. “Though the percentage of underweight children less than five years has dropped slightly, from 21 percent to 16 percent during the same period, unemployment is high and skills levels are low.”
Jagne, who presented a paper telling the Gambia Government what it must do to attain the millennium development goals (MDGs) by 2015, said the government must step up efforts to achieve MDG1: “End  poverty and hunger”, with nearly 60 percent of the people living below the food poverty line in 2010, compared to 33 percent in 1990. A new household economic survey is expected to provide updated information on poverty hunger statistics in The Gambia.

“But even if the MDG were achieved by 2015, some 600 million people in developing countries would still be undernourished. Having 600 million people suffering from hunger on a daily basis is never acceptable. The entire international community must act today and act forcefully to banish food insecurity from the planet”, the three heads of the UN food agencies said.
“Governments must ensure that a transparent and predictable regulatory environment is in place, one that promotes private investment and increases farm productivity. We must reduce food waste in developed countries through education and policies, and reduce food losses in developing countries by boosting investment in the entire value chain, especially post-harvest processing. More sustainable management of our natural resources, forests and fisheries are critical for the food security of many of the poorest members of society.”

However, Siga Fatima Jagne noted that there is a lack of transparency in Gambia, citing MDG8: “Global partnership”, from which development aid continues to flow into the country from bilateral (government-government) and multilateral donors (World Bank, IMF, ADB, EU etc).
“Some of these aid flows come with strings and conditions attached. The aggregate total aid flow is difficult to establish due to the lack of transparency in some organizations,” she stressed.

This year’s report “The State of Food Insecurity in the World 2011″ (SOFI) focuses on high and volatile food prices, identified as major contributing factors in food insecurity at global level and a source of grave concern to the international community, revealing that the “demand from consumers in rapidly growing economies will increase, the population continues to grow, and further growth in biofuels will place additional demands on the food system.”
Moreover, food price volatility may increase over the next decade due to stronger linkages between agricultural and energy markets and more frequent extreme weather events, but this will only make “smallholder farmers and poor consumers” increasingly vulnerable to poverty while short-term price changes can have long-term impacts on development, according to the report.
Painfully, the report added that “Changes in income due to price swings that lead to decreased food consumption can reduce children’s intake of key nutrients during the first 1000 days of life from conception, leading to a permanent reduction of their future earning capacity and an increased likelihood of future poverty, with negative impacts on entire economies.”
But price swings affected countries, populations and households very differently, the report found. The most exposed were the poor and the weak, particularly in Africa, where the number of undernourished increased by 8 percent between 2007 and 2008 while it was essentially constant in Asia.
Some large countries were able to shelter their food markets from the international turbulences through a combination of trade restrictions, safety nets for the poor and releases of food stocks. However, trade insulation increased prices and volatility in international markets compounded the impacts of food shortages in import-dependent countries, the report said.

For now, the Rome-based UN agencies, FAO, IFAD and WFP said stronger economies and high food prices present incentives for increased long-term investment in the agricultural sector, which can contribute to improved food security in the long run. When farmers react to higher prices with increased production it is essential to build on their short-term response with increased investment in agriculture, with emphasis on initiatives that support smallholders, who are the main food producers in many parts of the developing world.
At the same time, targeted safety nets are crucial for alleviating food insecurity in the short term, they said, but warned that it must be designed in advance in consultation with the most vulnerable people.
They stressed that investment in agriculture remains critical to sustainable, long-term food security. Key areas where such investments should be directed are cost-effective irrigation, improved land-management practices and better seeds developed through agricultural research. That would help reduce the production risks facing farmers, especially smallholders, and mitigate price volatility.

They do not loose sight that “private initiatives by millions of farmers and rural entrepreneurs will form the bulk of agricultural investments. High food prices have also provided incentives for increased investments by corporate investors (including cross-border public and private entities) in all parts of the agricultural value chain.”
And it is important that all investment considers and respects the rights of all existing users of land and related natural resources, benefits local communities, promotes food security and environmental sustainability, and contributes to adaptation to and mitigation of climate change impacts. Together with increased investments, greater policy predictability and general openness to trade are more effective than other strategies such as export bans, the report noted.
It said restrictive trade policies can protect domestic prices from international price swings, but such restrictions often also increase susceptibility to domestic production shocks, thus failing to reduce domestic price volatility. Restrictive trade policies also risk increasing volatility and prices on international markets.