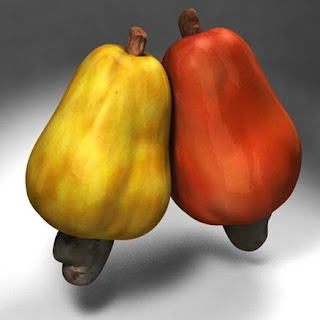 The Gambia is well known for its finest quality products of raw cashew nuts; hence it has been identified as the ideal gateway for cashew export in the SeGaBi (Senegal, Gambia and Guinea Bissau) sub-region.
The country has seen a tremendous increase in cashew production in the last five years with an estimated total of about 20,000 tonnes in 2011, compared to 6,000 tonnes in 2006. Given the prevailing good climatic condition, the Cashew Alliance of The Gambia (CAG) has projected a yield of approximately 25,000 tonnes in the next cashew season.

“Gambian cashew is one of the best in the sub-region with an outturn of 50-56 percent and nut count of 190-210 per kilogramme and is highly sought after by international buyers,” the CAG said on Tuesday.


The 6th Annual Conference of the African Cashew Alliance (ACA) - September 19-22, 2011 officially opened on Tuesday at a local hotel in the town of Kololi, situated west of the Gambian capital, Banjul. A record 350 delegates are attending the event which is being held under the theme “Bringing the Cashew World Together!” and is organized by the ACA in cooperation with the CAG.
“The growing cashew sector of the country is based purely on commercial viability of the product, the dynamism of the private sector and the support of the Government of The Gambia,” Mr Momodou Ceesay, CAG President said at the opening.
“This year, Gambia exported some 65,000 tonnes of raw cashew nut (RCN). The prospect for RCN export in the next two years is very good as demand continue to outstrip supply worldwide, with Gambia being the ideal gateway for export in the SeGaBi sub-region.”
He said as the industry becomes more popular among smallholder farmers, it will directly affect the economic and social growth and the development of the country. “Therefore, we must strive to improve the productivity of cashews through breeding and best management practices.”
This, he said, will encourage farmers as they’ll earn more income per unit area of land.
In his opening remarks, Gambia Minister for Trade, Industry, Regional Integration and Employment, Abdou Colley noted the cashew sector in Africa is characterized by small rural farmers with low yields, poor quality nuts and lack of business skills with consequential effects on their earnings.
He said “Cashew farmers in Africa rarely organise themselves into associations, thus weakening their bargaining position with dealers. They have little or no access to international markets and little processing capabilities resulting to low level processing of cashew in Africa.”
However, recent developments in the global cashew industry are rosy and have shown the industry’s possible transformation of agriculture in Africa. Based on this backdrop, Mr Colley challenge smallholder farmers who struggle to make as little as 90-330 Euros per year to take advantage of the industry’s huge potential.
“As world production hardly meet the rising and highly-prized demands in Europe, North America, China and India, every effort must be made to develop the industry’s supply chain in order to lift a significant portion of our populations out of poverty,” he stressed.

When he took his turn, the acting ACA President, Mr Idrissa Kilangi also noted that the unregulated market prices remain a major challenge in the cashew sector.
“As we are speaking, farmers cannot tell what the price of cashew will be next year,” he lament. “The potential to improve and increase production can be achieved but farmers lack mainly the incentives and capacity to do so. There is an ardent need to assist farmers in Africa.”
He said giving “poor African farmers” incentive should be a top priority, alongside the provision of new seedlings, sprayers, good market prices, and assisting them in agricultural techniques.
“We should help them with machinery input, and subsidies input to these farmers because if we leave the input expensive they will not buy it. Their capacity of production will go low, so we have to play our role to make sure that farmers increase their production,” said Mr Kilangi who is also a cashew processor from Tanzania. “Governments also have to do what they have to do to help farmers. This is very important in helping farmers.”

The Director, Private Sector Development of the Africa Cashew initiative (ACI) Ms Mary Adzanyo noted that market analysis shows an increase in the demand for cashew world wide. However, she argued that the production of Raw Cashew Nuts is far from meeting this increasing demand.
“Bringing the cashew world together is what we need to achieve sufficient quantities and high quality of raw cashew nuts to meet international demands; a sustainable and competitive processing industry in Africa; cashew sector favoring political and economical environments in the producing countries and long-term, reliable linkages and exchange of knowledge and experience,” said Ms Adzanyo who was speaking on behalf of the German Federal Ministry for Economic Cooperation and Development (BMZ).
“Cashew is becoming more and more important in the world and especially in Africa. Let us not only talk about the market demand, let us also reflect what that means for the African cashew farmers.”

For her part, Renata Clarke, a representative of the Food and Agricultural Organisation, said the FAO is not only concerned with the eradication of “non-safety food items but also to sustain safety standards.”
In this regard, she informed the confab that the FAO is currently implementing a food safety project in Iran, aimed at dealing with the harmful effects of aflotoxin in agricultural produce. This, she adds, is to ensure food safety, quality and sustainability.