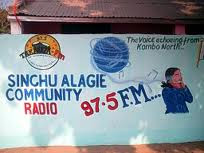 The Sinchu Alagie-based community radio, Taranga FM on August 11 announced that it will comply with the new order “to stop reviewing independent publications” reportedly issued to it by state security, the National Intelligence Agency (NIA).
The NIA gave “a clear-cut warning” to the management of Taranga FM to stop broadcasting independent newspaper publications, else the radio station will be closed-down, this time, for good, according to The Daily News.
The “new order” reportedly came on Wednesday August 10, six months after the FM Station, situated in the Kombo North District, West Coast Region - south-west of the capital, Banjul, resumed operations from a month-long closure by the NIA between January and February 2011.
“Yes, we have announced that we will stop broadcasting newspaper articles,” Mr Abdoulie Mendy, Taranga FM news presenter told The Voice on August 21.  However, he said the popular news broadcast; “Xibari-Besbi” (news of the day) will persist though it will not take into account articles published by private newspapers.
Closure
Taranga FM’s closure between January 18-February 14, 2011, emanated from the review of what the Gambian Security Agents termed as “opposition-linked” newspapers, according to media reports.
Xibari-Besbi, usually presented in the local languages (Wolof and Mandinka) is a review of news published mainly by private or independent newspapers, which has featured pro-government publications as well, was a feat that have served most uneducated Gambians and those who do not have access to local newspapers on their “right to know”.
As a result, the FM station’s Proprietor, Ismaila Ceesay was invited for grilling on several occasions by the NIA, and subsequently, the radio was shut down for 32 days.
Administrative procedures
On April 5, 2011, the Minister of Information and Communication Infrastructure, Mr. Alagie Cham said the radio temporarily ceased broadcasting in January to make certain that some “administrative procedures” are put in place.
His claim, which contradict earlier media reports that the “NIA forced the radio to close” came in response to the reason behind the closure, a question posed by United Democratic Party Parliamentarian for Jarra Central Constituency, Hon. Pa Jallow during the 1st meeting of the 2011 Legislative Question and Answer Session in Banjul.
The radio resumed its Xibari-Besbi after it was asked to re-open, risking another clamp down and this impromptu warning said to be the last, has forced the management to say it would “no more review” what has been termed as “opposition-linked” newspapers, which have been critical of the Jammeh-regime. A member of staff noted the radio will continue its news broadcast without the newspaper review anyway.
The Voice newspaper understands the radio will now focus on the soft news, with reviews of pro-government publications (like the Daily Observer) and rebroadcast news from the state-owned broadcaster – Gambia Radio and Television Services (GRTS).
Privately-owned Citizen FM in Gambia and Sud FM, a Senegalese-owned radio station in Banjul were both forced to close down between 2002 and 2005 respectively. They were engaged in news broadcasts in which they review private publications.
Author: Modou S. Joof for The Voice Newspaper
Posted by Modou S. Joof at 18:16