The Gambia open to debate on media reform – ministers 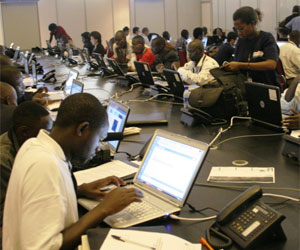 Commonwealth convenes landmark media forum in Gambian capital Banjul
The Gambia is open to debate on media reform, which it recognises as critical to economic and political development, Gambian ministers said on 1 August 2011.
Foreign Affairs Minister Momodou Tangara and Information and Communication Infrastructure Minister Alhagie Cham told local and international media, Gambian civil society, diplomats and communication scholars, that their government recognised media as important agents of development and were prepared to do their part in promoting that notion.
But the ministers also urged media to show greater responsibility, maturity, objectivity and professionalism, in order to be the genuine voice of the voiceless and a true guarantor of good governance.
The ministers spoke at the opening of the five-day Gambia Commonwealth Media Forum and workshop – hailed as the first opportunity for debate on media freedom and practice in the West African country, one of the 19 Commonwealth members from Africa. The Commonwealth Secretariat convened the event in collaboration with the Gambian Government and The Gambia’s Management Development Institute.
Commonwealth Deputy Secretary-General Mmasekgoa Masire-Mwamba told the forum that a vibrant media reflected a functioning democracy and was a mirror of development facilitation, and ultimately a mirror of sustained public dialogue.
Mrs Masire-Mwamba’s speech was delivered on her behalf by Ambassador Ayo Oke, Head of Africa Section in the Secretariat's Political Affairs Division.
Mrs Masire-Mwamba said the Commonwealth had made ‘governance' one of its main priorities and had devoted considerable resources to the promotion of political reform and to building capacities of state institutions involved in governance, especially in promotion of democracy, electoral management and the rule of law; in strengthening the judiciary; and in support of broader public sector governance and institutional development.
“The media is a critical partner and has contributed to the delivery of our governance programmes. It has provided the platform for debates, highlighted some of the abuses of government control over the media, set standards, trained journalists – just as we are doing in this special programme on media and economic development,” Mrs Masire-Mwamba said.
She also spoke of the Commonwealth’s values of good democratic governance, human rights and the rule of law. She highlighted that media and government could partner in promoting this agenda.
“A basic prerequisite is for the media to submit to a robust self-regulation in order to be a credible arbiter and veritable conscience of the society. This, of course, should be supported by positive regulation by governments through enabling legislation that allows freedom of expression in a responsive and responsible manner,” she said.
Mrs Masire-Mwamba called on both the Gambia Government and the media to embrace mutual respect and commit to play their respective roles in ensuring citizens were well informed of issues in preparation for and in the aftermath of general elections expected later this year.
Delivering the keynote address, Nigerian editor Segun Adeniji said the media landscape in The Gambia had raised some concerns domestically and internationally. He said a growing perception that the Gambian Government was hostile to media and had laws on its statutes restricting media freedom undermined its economic and development agenda.
“I hope that regressive statutes have been dropped in sync with modern trends. If not, this requires action as a shackled media definitely cannot promote economic development,” said Mr Adeniji, chairman of the editorial board of THISDAY newspapers, one of Nigeria’s top newspaper brands.
Posted by Modou S. Joof at 19:07