Dictatorship Is Incompatible With Free Expression


Ø  Unplanned settlement, poor drainage system, the main causes of flooding in Kanifing Municipality
Ø  CDS Kinteh says good communications safe lives sometimes
Ø  Make hay while the sun shines, President Jammeh tells Gambian youths
Ø  Greenie Environmental Education project gauges feedback
Ø  Gambian to host Youth Crime Watch’s West Africa Office
Ø  NEA nurturing the young to take ownership of the environment
Dictatorship is impossible when there is freedom of expression
A United States Paris-based veteran journalist has said dictatorship is certainly impossible where there is freedom of expression; this is simply because dictatorship is incompatible with freedom of expression.
“It simply cannot happen, it is impossible to talk of democracy without talking about freedom of speech,” Mr Eduardo Cue said at the beginning of a week-long intensive training for Gambian journalists on the “role of journalism in democracy, ethic and writing skills”.
The training, held at the American Corner along Kairaba Avenue, brought together 20 journalists from the print media and was organized by the American Embassy in Banjul.
It is being held on two phases, with eight journalists from the electronic media ending theirs on July 28, 2011.
Prior to his lectures, Mr Cue noted that democracy is impossible without freedom of expression, speech in all forms, including the right to speech, write and association.
He described freedom of expression as “an element of other things that people enjoy” in a country, a philosophical concept, and a gift for every citizen.
According to him, it forms part of the right to assemble with others, forming associations, unions, and groups, among other things.
Having been to 29 African countries, Mr Cue described the continent as important, noting that he is very much aware of the extremely difficult conditions under which African journalists operate.
The fundamental role of a journalist is to give the tools to the people to make decisions and these tools are of information, the right to know what is going on in their countries, neighborhood, region, and the world, he said.
“Freedom of the press can boost the economic development of a country,” he adds, however, he stressed that the role of journalists is to write on issues affecting society. “This is to call the attention of the government to play its role in solving the problems facing its citizens.”
He stated that in a democratic country, an independent judiciary is vital, while noting that a journalist has to be independent in order to do his work effectively. However, he is of the opinion that journalists in Africa are not politically independent.
Mr Cue also charged that journalists should not be bias in their reportage, they should be people who can analyse issues and explained them to the people in an understandable manner.
Respect for ethics protect the creditability of a news article, image of the journalist and increases the professionalism of the press. A code of ethics is good in a country where there is no freedom of expression; it protects the young and aspiring journalist from falling into the trap of governments, individuals and enemies of the press.
The erstwhile spokesperson of the Geneva-based United Nations High Commission for Refugees reiterated that “democracy is a process and not an event”. 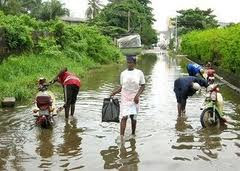 Unplanned settlement, poor drainage system, the main causes of flooding in Kanifing Municipality
Unplanned settlements and poor drainage systems are the main causes of flooding in the Kanifing Municipality, according to Mrs Binta Sey Jadama, the Municipality’s Disaster Coordinator.
“The drainage system within the municipality is still not enough and some are in bad conditions, others are not functioning,” she told this reporter in an interview at her office on Wednesday 20th July, 2011.
Disaster is a man-made or natural hazard that has come to fruition resulting in an event of substantial extent causing significant physical damage or destruction, loss of life and property or drastic change to environment.
For the past years, Gambia has been experiencing a lot of disaster occurrences, flooding, fire outbreaks and others, but many describe these disasters as man-made, which can be prevented from occurring.
Mrs Sey Jadama added that a good or central drainage system will allow water to flow freely, thereby reducing the risk of flooding within the municipality. “Solving this problem needs long term planning, because people have been living in water ports for a long time now and evacuating them will be very expensive,” she said.
However, she said the municipality has put in place several plans for disaster preparedness; among them, training of rapid response teams on the disaster management data collection.
She said: “We are already on a cleaning exercise of the drainage systems in which communities are taking the lead. This will allow the free flow of water within the environment they are living in.”
According to her, disaster management has been decentralized as part of plans for disaster preparedness and prevention, people at the grass-root level will be leading the assessment teams to their areas.
She adds that as part of these preparedness plans, they have provided the public broadcaster, Gambia Radio and Television Services (GRTS) with a tape and a drama clip for broadcast to help increase the level of awareness of the people.
This, she said is done in partnership with the Eco Project under the Non-Governmental organisation, Concern Universal and the GSM Company, QCell. Both have been devoting part of their air time on GRTS to sensitise the people on disaster preparedness through drama.
She added that the central government through the main body responsible for disaster management in the Gambia National Disaster Management Agency (NDMA) is also funding the ‘disaster hot spot’ around the country.
Within the Kanifing Municipal Council (KMC), Bundung Borehole and Tallinding have been identified as “disaster hotspots” because these areas recorded the highest number of disaster victims in the region last year.
But she said Ward Committees are currently working with their communities to reduce the level of threat and occurrences of floods in this rainy season, adding that since there have been problems within the KMC where runoff water is blocked by settlements from flowing into streams and rivers.
She said people should stop building on water courses in order to allow for the free flow of rain water during torrential rains.
Research has showed that all disasters are hence the result of human failure to introduce appropriate disaster management measures. Developing countries suffers the greatest cost when a disaster hits.
More than 95 percent off all deaths caused by disaster occur in developing countries, and losses due to natural disasters are 20 times greater (as percentage GDP) in developing countries than in industrialized countries.