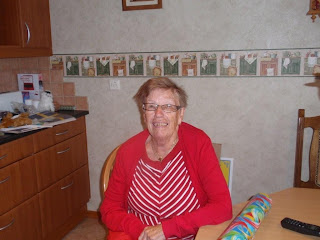 Gun Karlsson, Founder and Head of the Kumla Gruppen, Sweden
The head of the Kumla Gruppën, Gun Karlsson has expressed her delight of the success registered by many of the students who have benefited or are still benefiting from a scholarship programme that was initiated more than 45 years ago.
The Kumla Gruppën, a Sweden-base humanitarian organisation under The Gambia Swedish Society provides scholarships to students mainly at Saint Michael’s from primary to tertiary education. Most of the beneficiaries are less privilege students whose parents could not afford to provide for their educational expenses.
During the group’s recent visit to The Gambia for two weeks as from November 11, 2010, Gun Karlsson told The Voice newspaper in an interview that her organisation consists of 500 members and this year she came with 40 of them.
“We are satisfied with the support that we are giving to the students, Gambian people are so kind and we are grateful to their efforts in making the initiative as success,” she said.
She added that many of the students who benefited from the scholarship programme have graduated and acquired jobs in various professions in The Gambia, “For that we are proud of.”
The group has been visiting The Gambia on an annual basis; however, in 2008 they decided to make it a biannual event. Asked whether the shift was as a result of the economic down turn, she said it is difficult for us to be coming here every year, it is too expensive for us but we’ve been generous to Gambian people.
“Despite the crises, we have not stopped paying for any of the students, we take care of them all,” she said.
According to her, the scholarship programme was initiated 45 years ago at St. Michael’s Primary School and when she took over as the leader and founder of the Kumla Gruppën in 1987, she decided to expand the programme into an organisation and named it the (Kumla Gruppën).
The group is one of many Swedish organisations providing scholarships for students in The Gambia. “I discovered that there were a lot of Swedish organisations offering scholarships in the country, but most of them were centered in the urban areas and other parts of The Gambia. I decided to focus on the North Bank Region (NBR) where there were little or no scholarship programmes,” she said.
Mama Gun Karlsson, who is also an ardent football fan, says she was keen on watching The Gambia Under-17 match against Tunisia U-17 in the final round of qualifiers for the African Youth Championship in Banjul on Saturday 20th November 2010.

Gambia defeated Tunisia by a lone goal to qualify for the African Youth Championship to be played in Kigali, Rwanda from 07-22 January 2011, however, Gun Karlsson, also says she has high regards for Zlatan Ibrahimovic and that the Swedish-Milan striker is his favorite player of all times.
Posted by Modou S. Joof at 21:02

Email ThisBlogThis!Share to TwitterShare to FacebookShare to Pinterest
Labels: Humanitarian