As part of the "I am a GYINer national campaign" set in motion since July this year, Global Youth Innovation Network Gambia Chapter (GYIN Gambia Chapter) hosted a training session for Gambian journalists, bloggers and online reporters.

Held at the Kairaba Beach hotel, Senegambia on Nov. 11, 2012, the session facilitated by the International Fund for Agricultural Development (IFAD) Communications Division, was meant to equip the participants with the requisite skills needed to be at pace with a fast changing global cyber space.

The session held on the margins of the 7th Forum for IFAD-funded Projects in West and Central Africa (WCA) held in The Gambia from Nov. 12-15, was also intended to hone the skills of bloggers and online journalists on online reporting and to effectively and efficiently make use of an ever growing social media.

GYIN Gambia chapter, the official Gambia representative of the Washington District of Colombia-based GYIN International, initiated and supported by IFAD and Phelps Stokes, aims to contribute to the reduction of poverty among poor rural youth in The Gambia by exposing them to opportunities and business prospects, and innovation.

It also intends to expose them to knowledge on replicable youth successful models income generating actions and to enable them to create and engage in sustainable small scale agri-businesses and entrepreneurship.

As part of the "I am a GYINer national campaign", this session is to teach you (journalists) on the basics of online reporting and how to twit, post stories on blogs and use of other social media websites, said Mamadou Edrisa Njie, national coordinator GYIN Gambia.

“It is also meant to keep online,” he adds.

He commends IFAD and its Country Programme Manager and the three IFAD projects in Gambia (Rural finance, PIWAMP, and LHDP) for the support given to GYIN Gambia since inception. 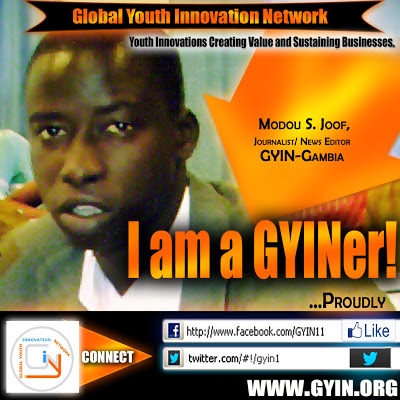 IFAD Country Programme Manager for the Gambia, Mr. Moses Abukri hailed the network for launching the "I am a GYINer national campaign" which was set in motion by GYIN International, and meant to establish GYIN in 100 countries by December 2014.

The session was facilitated by Roxanna Samii and Beate Stalsett, senior officials of the IFAD Communications Division in Rome, Italy.