Last year, remittances also surpass the total monetary value of the country’s export which stands at about 9% of the country’s GDP. The increase apparently “beef up” Gambia’s GDP which grew by 6.7% in 2009, but decreased to 5.5% in 2010 and further diminished to 3.3% in 2011.

“Remittances as a percentage of the country’s GDP has grown over time from a mere about 3 to 4% in the 1990s to nearly 10% of the GDP in 2011,” admits Mr. Amadou Colley, Gambia’s Central Bank Governor (CBG).

“It has become one of the largest sources of foreign exchange for the country,” he said of remittances in a statement read by Mr. Ismaila Jarju, CBG’s director of research during the November 28 launch of the Least Developed Countries Report 2012 in the town of Bakau, The Gambia.

The impact of remittances on the Gambian economy is huge bearing in mind that they are used to meet cost of living of hundreds of thousands of families in The Gambia, the school, medical fees and book bills of tens of thousands of children, and create thousands of jobs in the construction industry every year.

With the net remittances for all developing countries growing significantly in recent years, from just over US$74 billion in 2000 to US$200 billion in 2007. The Gambia Government recorded in 2007 more than US$63 million of inward remittance flow, compared to US$58 million a year earlier.

This figure rised to US$67 million in 2008 but drops to US$60 and 61 million in 2009 and 2010 due to the global economic recession, and while outward remittance flow has been very low, the highest record of which is pegged at US$3 million as of 2009.

This has left independent observers thinking it is an indication that remittances can contribute to the achievement of the Millennium Development Goals (MDGs) since they mostly benefit the poor and disadvantaged.

Regardless of this significant contribution to the national economy of the poor tiny West African nation, the Central Bank Governor admitted The Gambia is still at the “developmental stage” to harness the full potentials of remittances - the main focus of the 2012 LDCs Report published by the United Nations Conference on Trade and Development (UNCTAD). 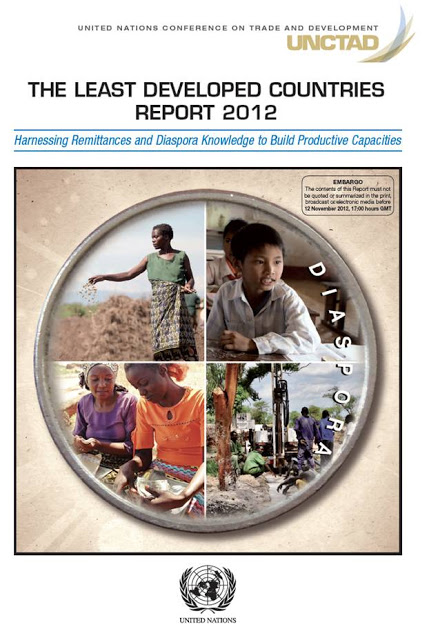 Mr. Colley admitted that most of the remittances flows are channeled into consumption but notes it also plays a significant role in housing financing and a key driver of sectors such as wholesale and retail trade.

“The Central Bank in collaboration with Gambia Investment and Export Promotion Agency conducted a survey in the real estate sector and found out that most of the investments in that sector are done by Gambians in the Diaspora,” he said, “When the financial crisis stuck, we reviewed the data and saw that the sector was actually impacted. Though remittance was still coming in but the funds that were channeled into the real estate sector actually went down because of the recession in the global economy.”

“The 2012 LDC Report: Harnessing Remittances and Diaspora knowledge to Build Productive Capacities” suggests that LDCs put in place policy actions to harness remittances and turn over time, the brain drain into positive impact by engaging the diaspora.

But according to Governor Colley, the Central Bank has been working in this direction – trying to harness remittances.

“The Central Bank of The Gambia has been working assiduously to improve the payment system. This is to reduce the cost of remittances because its cost is very high in this part of the world and this makes access a bit difficult,” he said.

“So we have been working to upgrade the payment system also. This development is part of efforts at modernizing and upgrading the country’s payments, clearing and settlement system infrastructure.”

With this new undertaking, commercial banks will be required to process cheques deposited or lodged or payment instructions for remittances received the same business day as long as the transaction occurred within workings days and between the hours of 8:00 am and 1:30pm.

This is being done in a bid to reducing the cost of remittances, he reiterated.

He also revealed that work is also underway to improving the regulatory environment affecting remittances because The Gambia’s financial sector is “very shallow” - as a result most of the regulations concerned the formal banking sector.

“This is also an obstacle to some of the informal channels that received remittances to The Gambia,” he noted. “One very important challenge we have in this country is the fact that data reported on remittances is the one we obtained through the formal banking systems as well as the bureaus.”

In The Gambia, where record keeping has been a major problem, there are no statistics on the remittances inflow through the informal channels which accounted for huge sums of monies.

Even the CBG Governor Mr. Amadou Colley knows this. He said: “We all know that in developing countries the informal channels account for big chunk of remittances flow, and this is normally unaccounted for.”