ON THE HOME FRONT

Gambia Among Eight Most Difficult Countries To Do Business 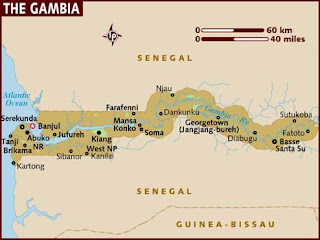 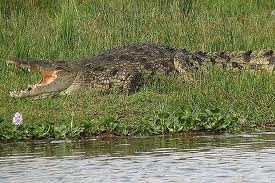 Jeshwang Women To Bargain With Crocodiles
After three years of making do with scary crocodiles, now the Women rice growers and gardeners of Old Jeshwang, a town in the Greater Banjul Area, are seeking out plans to settle their long standing problem.
A host of crocodiles are trapped in an open rice and vegetable growing field in the town due to a blockade of a canal caused by flooded rubbles, which is preventing the crocodiles from swimming down the canal into the river.
Their presence have brought so much fear in the hearts of gardeners, however, there are no reports of incidences of crocodile attacks on the people.
Aja Mai Kambi, a vegetable gardener and a rice grower is already setting out possible measures to send away the crocodiles from their gardens.  Speaking to The Voice July 9, Mrs Kambi underscored the need to remove the blockade, and cutting down grasses behind the rice fields, which is serving as a safe heaven for the “harmful reptiles”.
“They cause alarm and fear in us during work. This hinder most of our works,” she decried, while calling on the Government and Non-Governmental Organisations to assist them in their struggle. “We lack the ability to carry out such a task.”
On her part, Mrs Awa Joof, a rice grower described their ordeal as “terrifying” and needed urgent attention.
Other vegetable gardeners also expressed similar sentiments.
2.6 Billion People Still Lack Access To Improved Sanitation
Access to sanitation has been recognized by the United Nations (UN) as a human right, a basic service required to live a normal life, and yet, some 2.6 billion people or half the population in the developing world still lacked access to improved sanitation.
In a bid to improve the health and well-being of millions of people worldwide, the United Nations on June 21, 2011 launched a major push to accelerate progress towards the goal of halving, by 2015, the proportion of the population without access to basic sanitation.
The Report: “Sustainable sanitation: The Five-Year-Drive to 2015,” was established by the UN General Assembly in a Resolution adopted last December, calling on Member States to redouble efforts to close the sanitation gap, one of the eight Millennium Development Goals (MDGs) that world leaders pledged to achieve by 2015.
The resolution also called for an end to open defecation, the most dangerous sanitation practice for public health and one that is practiced by over 1.1 billion people who have no access to facilities.
“Sanitation is a sensitive issue. It is an unpopular subject. Perhaps that is why the sanitation crisis has not been met with the kind of response we need,” the UN Secretary-General Ban Ki-moon said at the launch. “But that must change. It is time to put sanitation and access to proper toilets at the centre of our development discussions.”
However, he admitted that ending “open defecation” will not be easy. It will require strong political commitment, a focused policy framework and reliable supply chains for both building and maintaining affordable latrines. “Most important of all, we need effective public education so people understand the hazards of open defecation. We must convince people to change these unhealthy practices.”
Gambia sustainable land management project lunched
The permanent secretary ministry of agriculture Mr. Babucarr Njie has officially lunched The Gambia sustainable land management project, marking the beginning of the implementation of the Gambia’s component of the Global Environmental Facility (GEF).
The launch, held at the Paradise Suites Hotel, Kololi, was organized by the Department of Agriculture and funded by the African Development Bank (AfDB) through GEF project.
Speaking on behalf of the deputy minister of agriculture, PS Njie noted that the participatory integrated watershed management project (PIWAMP), as the host project for the GEF is co-financed by the government of The Gambia (GOTG), the international fund for agriculture development (IFAD) and the African Development bank (AfDB).
He said PIWAMP has a demand driven integrated watershed development approach to plan, manage and address our natural resource degradation problems. “Land degradation is one of the major limiting factors to agricultural production, increased food security and also has both local and global environmental consequences.”
He described this as an acute factor on which an agreement was sought from the GEF to complement the GOTG/IFAD/AfDB investment in PIWAMP. The incremental GEF investments is  aimed at ensuring that  PIWAMP interventions contribute to the realization of optimal global environmental benefits, including reducing land degradation, conserving biodiversity and improving the adaptive response to climate change.
Mr. Timothy Mkandawire, financial management specialist of AfDB, noted that the project is an illustration of the bank’s partnership in development among various institutions for the Government of The Gambia.
He said the key objective of the sustainable land management project is to improve livelihoods through promotion of community-based watershed/landscape management approaches.
And also to enabling resources-poor community to reverse declining land productivity and overcome the causes and negative impacts of land degradation on the structure and functional integrity of The Gambia’s lowland and upland ecosystem resources.
“The project is expected to result in environmental and socio-economic benefits through investments in sustainable land management interventions aimed at restoring, sustaining and enhancing the protective functions of lowland upland ecosystems,” he said.
Posted by Modou S. Joof at 21:50