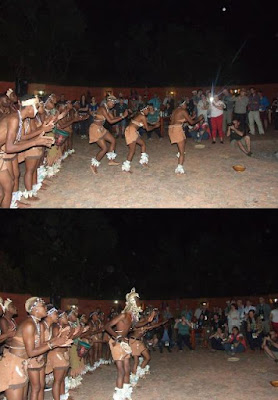 Setswana or Tswana people of South Africa (Photo Credit: M.S.Joof/TNBES/April 4)
Like other African countries, South Africa has a rich and diverse people and culture. "There are 11 official languages [and] a few other minor languages and dialects. English is widely used and understood," says Liza Bohlmann, Head of Special Projects at Landbouweekblad, an Agriculture Weekly Magazine published in Afrikaans language. Among the tribes in South Africa are the Tswana People (pictured) entertaining IFAJ delegates during an evening at the Intundla Game Lodge and Bush Park in in the Gauteng region, 30 minutes east of Pretoria. The Setswana or Tswana people (language: Tswana) are found in Botswana and Lesotho but the largest group of this tribe is found in South Africa, according to Buzz South Africa.