More than half of firms in Gambia (54%) said unreliable electricity supply has been the single biggest obstacle to their businesses, the 2014 Africa Survey reveals.

The numbers are grim across sub-Saharan Africa where more than 45% of firms said the lack of reliable electricity was a major problem.

Like The Gambia, businesses in Guinea (64%) and Nigeria (64%) also admitted it was the single biggest problem, according to a statement from Good Governance Africa, GGA, the publisher of the Survey.

The Africa Survey 2014 identifies “unreliable or insufficient electricity”, “corruption” and “difficulty in getting bank loans” as the three biggest constraints to doing business in sub-Saharan Africa.

Firms in sub-Saharan Africa also cited getting a bank loan (42%) and corruption (43%) as major obstacles to doing business, according to the Report.

It stated that it is only in Angola did the largest number of firms (29%) identify corruption as the single greatest constraint to business. However, more than 40% of companies in Côte d’Ivoire (45%), Malawi (46%), Mali (44%) and Zimbabwe (47%) cited getting credit as the single biggest obstacle to business. 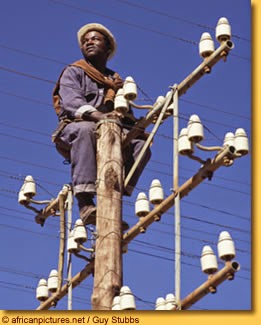 This year, the World Bank asked a representative sample of companies in sectors other than agriculture and financial services to choose which barriers represented a major constraint to doing business, and then asked them to choose the single biggest barrier from a list of 15 business environment obstacles.

“Only three African countries are ranked among the world’s top 50: Mauritius (28), South Africa (43) and Rwanda (46). Of the 50 lowest ranked countries, 30 are African,” the World Bank later revealed in its 2015 Ease of Doing Business Index.

“It is still tougher to run a business in many African countries than elsewhere,” said Karen Hasse, a GGA researcher.

Hasse added: “Improving electricity supply and access to loans and wiping out corruption would encourage entrepreneurship and allow companies to expand their operations.

“This in turn would produce many benefits, among them greater employment and tax revenues for African governments.”​

The Africa Survey is a comprehensive annual collection of social, political and economic indicators for the continent’s 55 countries.

The South Africa-based research organization, GGA, promotes better government management. Its main publications are the Africa Survey and Africa in Fact, a journal that tracks government performance and proposes solutions.

You Can Read All Other Findings In The Africa Survey 2014 Published On TNBES HERE  or (http://thenorthbankeveningstandard.blogspot.com/search/label/2014%20Africa%20Survey)